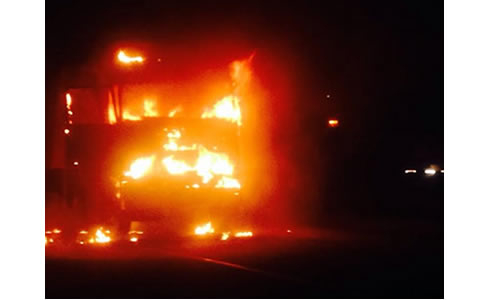 But for the valiant efforts of a lone police officer and good Samaritans who rushed to the scene, the entire cargo load would have been lost to the blaze.

Speaking to myjoyonline.com the driver of the truck with registration number GW1949U, who gave his name as Alhassan Adam, said he was transporting the sacks of cocoa from Nyinahin to Tema.

He explained that sometime after 8pm, while driving along the N1, he smelled something funny and stopped the truck to investigate its source.

Alhassan said he descended from the vehicle only to discover the bottom of the cabin on fire.

According to Alhassan, attempts to put out the fire with his fire extinguisher proved unsuccessful. Attempts by onlookers to reach the fire service for assistance also proved difficult.

Several drivers passing by the blazing truck pulled over to offer their extinguishers.

General Constable Bismark Frempah, with badge number 46007 who chanced upon the scene, quickly took charge of the chaotic situation.

The brave officer first attempted to fight the fire with extinguishers produced by good Samaritans and then went on to try and disconnect the cabin.

When both attempts proved fruitless, he and other good Samaritans focused on removing the tarpaulin cover, in order to slow the progression of the fire, and hauling the sacks off the truck.

At the time of this reporter’s arrival, the entire cabin was engulfed in flames and yet the policeman simply refused to give up, putting his life at risk to prevent the spread of the fire.

After several phone calls and about forty (40) minutes of waiting, the fire service showed up to put out the blaze.

The fire was extinguished within ten minutes of their arrival but sadly, the cabin of the truck had been reduced to an empty shell.

Thankfully, no lives were lost and there were no recorded injuries. It was not clear immediately if any of the sacks of cocoa had been damaged.