With Sir Kim Darroch heading for the exit, the US portion of the leaked cable controversy draws to a close.

While the British government will continue to deal with political fallout for weeks, if not months, to come, it’s not too early to provide assessment from the US side of the Atlantic.

As Forrest Gump might say, power is as power does. Donald Trump as president has made a habit of stripping away norms and traditions – the veneer that cloaks the exercise of political power – and operating according to his own set of rules.

There have been howls of protest from the president’s political opponents and the occasional tut-tutting from members of his own party, but he has operated largely unchecked.

Now the president’s norm-breaking has crossed the Atlantic. After standing by Sir Kim for roughly 48 hours, the British government acceded to his decision to fall on his own sword – and the leading candidate to become the next prime minister essentially held his tongue throughout.

Ambassadors come and go. Sometimes they are ushered from their position because of disputes with the host country. Outside of war or documented espionage, however, the drama doesn’t spill into public view.

Welcome to the age of undiplomatic diplomacy – and the realisation that the “special relationship” between the US and the UK isn’t necessarily that special.

“America is respected again”. It’s a common refrain from the president in speeches, tweets and off-the-cuff remarks. Mr Trump insisted during his 2016 campaign that then President Barack Obama had degraded American standing in the world, and pretty much since his inauguration he has boasted that he has restored the nation’s tarnished reputation.

The president frequently likes to recount how other world leaders have (privately) praised him for the job he’s doing and expressed envy of American strength and prosperity.

Call it his “Make America Great Again” promise, projected on the world stage.

The trouble for the president is that Sir Kim’s blunt assessment of White House dysfunction, chaos and incompetence dramatically undercut this rosy picture. Here was the representative of a close ally in confidential memos to British leaders essentially saying the emperor has no clothes. 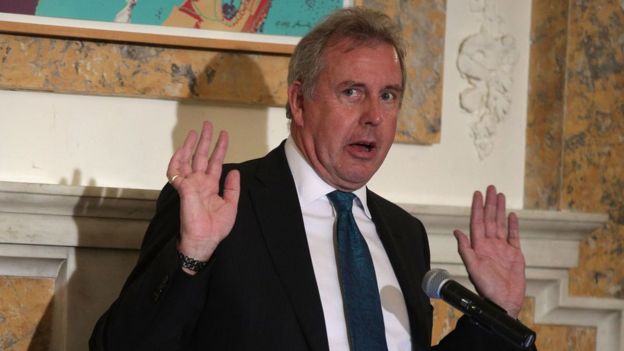 Photo: Sir Kim Darroch speaks at an event in Washington DC in October 2017

It doesn’t take much imagination to picture Mr Trump’s Democratic opponent throwing Sir Kim’s words in the president’s face during the 2020 campaign, either in advertisements or on the debate stage.

And so the ambassador had to be taken out and his reputation shredded, as quickly and aggressively as possible.

In the UK, the one-sided feud between Mr Trump and Sir Kim was all-day, headline-grabbing news. It roiled the British government, spilled over into the Conservative leadership contest and consumed political conversation.

In the US, on the other hand, it was but a blip on the radar – just the latest instance of the president feuding with a critic, whether it’s a celebrity, a political opponent or even a member of his own administration.

The president wrote 21 tweets in the two-day period the Darroch conflagration burned – he took swipes at India, the federal judiciary, Democrats and the “radical left”. He boasted about the economy and shared video clips from Fox News.

The original series of attack tweets targeting Theresa May and Sir Kim merited US coverage, but the second round on day two received only an occasional mention on US cable news and nary a word on the main page of the New York Times website.

inevitable denouement before the national attention moves on for good.

Senator Lindsey Graham, one of the president’s staunchest supporters in Congress, lamented the ambassador’s departure and tweeted that he “got a raw deal from the press”.

By afternoon, attention was already turning to embattled Labour Secretary Alex Acosta and his involvement in the Jeffrey Epstein sex trafficking scandal.

And the beat goes on.

This is how Trump “fires” people

The British government just got a taste of Mr Trump’s personnel management skills. Despite making a name for himself on reality television as the man who dramatically fires people, that’s not his style – and it hasn’t been for much of his professional career.

Mr Trump doesn’t fire people. He simply makes life so uncomfortable for them that they eventually leave of their own accord.

If Mr Trump wanted Sir Kim out, he could have ordered him designated a “persona non grata” under Article 9 of the Vienna Convention on Diplomatic Relations. The UK would have been legally obligated to remove him quickly from his post.

He didn’t do that.

Instead, the president lobbed off a series of derisive tweets, disinviting the ambassador from White House events and – whether by direction or implication – cutting off staff interaction with the man. 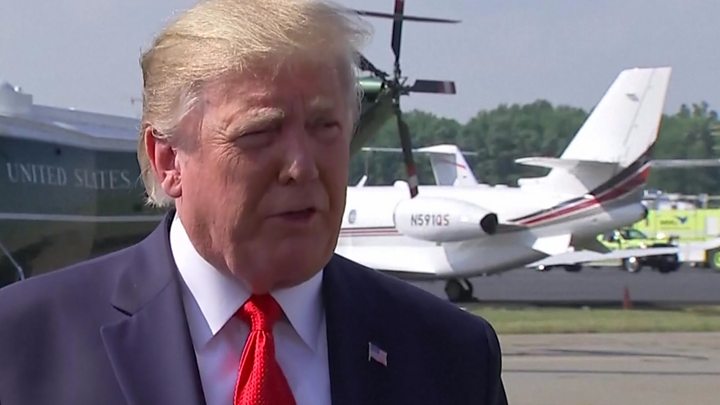 While we haven’t seen this kind of process play out on the international stage, it’s a recurring theme of his presidency. Mr Trump has publicly bashed and belittled members of his own administration, including Secretary of State Rex Tillerson and, most notably, Attorney General Jeff Sessions. He iced out former chiefs of Staff Reince Priebus and John Kelly.

All eventually resigned, with their presidential pariah status obvious to anyone with a pulse. Sir Kim’s decline and fall was simply more abrupt.

The Trump rift with the State Department continues

It’s no secret that there have been icy relations between the White House and the Department of State since the early days of the Trump administration. The president may view the department, which his presidential opponent Hillary Clinton headed from 2009 to 2013, as rife with critics and ideological opponents – and he may not be entirely wrong.

The president’s foreign policy style certainly is a jarring contrast to the way American diplomacy has traditionally conducted.

That contrast was on full display on Tuesday, when department spokeswoman Morgan Ortagus held a public press conference – her first in more than three weeks. Under repeated questioning by reporters, Ms Ortagus insisted that relationship between the US and the UK was “bigger than any individual; bigger than any government”.

She said she couldn’t speak for the president or explain his tweets, however. Those questions would have to go to the White House.

“We will continue to deal with all accredited individuals until we get any further guidance from the White House or the president, which we will, of course, abide by the president’s direction,” she added.

Presidential tweets, it seems, weren’t guidance enough to change course – and beyond that, there was no guidance whatsoever.

Handling an unscripted president who makes announcements without consulting or even sometimes informing staff has been a challenge for many members of the administration, in the State Department and elsewhere.

They’re often left wondering whether the president, either in comments or tweets, is officially changing policy or simply letting off steam. That’s often led to confused or inconsistent responses on topics like immigration enforcement, a transgender ban in the military, legal strategies and US troop deployment.

There’s a word for that. “Dysfunctional,” perhaps?