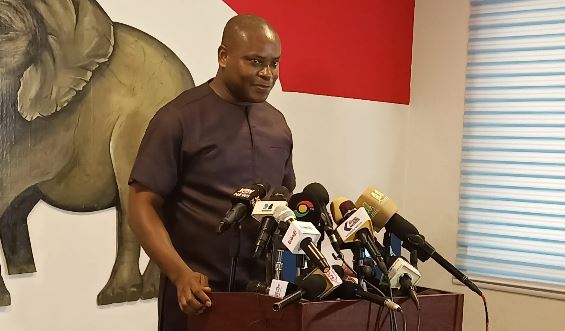 The New Patriotic Party (NPP) has described as false comments made by Former President John Dramani Mahama over alleged non-payment of some entitlements due him by the State.

The Party said evidence obtained from the Office of the Chief of Staff indicated that the State had provided official vehicles to Mr Mahama and also catered for the salaries of the staff of the former President.

Former President Mahama, in a recent media interview, said he catered for his own bills, including electricity, water, medical bills, and staff salaries, adding that he only received his monthly pension from the State.

Addressing a news conference in Accra on Wednesday, Mr Richard Ahiagbah, Director of Communications for the NPP, said the Government had not denied Mr Mahama any of the entitlements guaranteed under Article 71 of the 1992 Constitution.

“We have evidence of correspondence between former President Mahama’s office and the Chief of Staff contradicting his (Mahama) claims. We also have a letter from the former President’s Office introducing his staff and who the State should pay.

“We have correspondences from the Office of the Chief of Staff facilitating the payment of these salaries,” he said.

Mr Ahiagbah said once the Emoluments Committee had completed its work on entitlements for Article 71 office holders, all beneficiaries received what was due them by the State.

The Office of the Former President is yet to respond to the allegations.

Like all Article 71 office holders, Presidents retire on their salaries and are entitled to allowances, facilities and privileges and retiring benefits or awards recommended by the Presidential Emoluments Committee and approved by Parliament.

In a recent interview, Former President Mahama said he would review Article 71 of the Constitution if he was re-elected in the 2024 presidential election.

The NPP, however, challenged Mr Mahama to return all benefits he had received under Article 71 to justify his “seriousness” about reviewing the law.

Mr Ahiagbah questioned why Mr Mahama did not review the law during his tenure as President, accusing him of failing to implement the recommendations of the Constitution Review Commission in 2012.

“What former President Mahama is saying today cannot be taken seriously because he has already failed Ghanaians on this matter,” he said.

DISCLAIMER: The Views, Comments, Opinions, Contributions and Statements made by Readers and Contributors on this platform do not necessarily represent the views or policy of Multimedia Group Limited.
Tags:
Mahama
New Patriotic Party
NPP