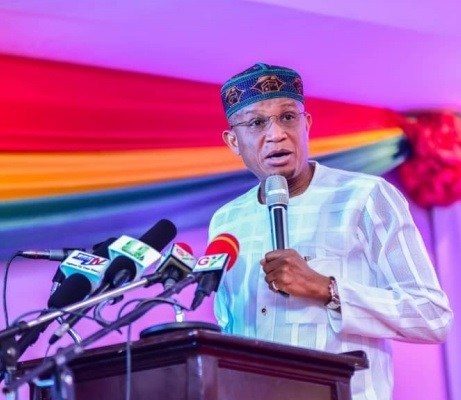 Good afternoon ladies and gentlemen of the media. You are welcome to yet another Monday and the weekly press conference of the New Patriotic Party (NPP).​

Gradually, election day, 2020 is closing in on us and minds are crystalising on who to elect as the President of the Republic of Ghana from January 2021 to January 2025.

Week on week, we have made the argument that President Akufo-Addo presents the best opportunity for moving Ghana forward. Today, we have called you to re-iterate that point and to make it even more forcefully.

Ladies and gentlemen of the media, everything rises and falls on leadership. Leadership is the single most important trigger for the development and forward movement of any society.

In the past three years going on four, we have seen and experienced a palpable advancement in the fortunes of our country.

This is thanks to the leadership of President Akufo-Addo. Today, we want to dwell on three major leadership qualities that all researchers on leadership agree are critical for the forward movement of any society.

These are trust/credibility, vision/conviction and empathy/compassion. It is not for nothing that we titled our manifesto, LEADERSHIP OF SERVICE.

We believe that leadership should be for the service of the people. And everything that we have done these past three years has been absolutely in service to the people. Thanks to the leadership of President Akufo-Addo, our country is on the move.

​We have moved from annual growth rates of 3.6% to 7.0% under the Presidency of Nana Akufo-Addo.

We have moved from annual manufacturing value-added growth rates of 2.1% to the average 6.7% annual Manufacturing Value Added growth under President Nana Akufo-Addo.

Ladies and gentlemen of the media, what is the implication and impact of these statistics on the lives of people?

A strong economy such as the one we have created is what creates the fiscal space that allows for us to implement free SHS, which today allows 400,000 students, who but for free SHS will be on the streets.

Remember prior to free SHS, average 100,000 students dropped off in the transition from JHS to SHS.

Education is life and livelihood. Education is what enables me to stand before you today to address the nation.

Education is what allows a poor boy from Widana a remote corner of the Upper East Region to be Senior Lecturer in Religious Studies and to be Minister for Inner City and Zongo Development.

There is a direct correlation between education and the eradication of poverty. It took the conviction and vision of President Akufo-Addo to make the point that Ghana needed to invest all of its resources in the education of its children.

Today, thanks to the vision and conviction of President Akufo-Addo, school enrolment figures have increased for primary school.

We could not have implemented free SHS without the vision and conviction of President Akufo-Addo.

Many people had argued that free SHS will collapse both the economy of our country and its educational system.​ It takes a leader with conviction to stand his ground and to implement such a life-transforming policy.​

Prevalence of undernourishment has reduced at an average annual rate of 10.3% under the NPP compared to 0.6% under previous governments.

Ladies and gentlemen of the media, the point I am making is that it takes bold, decisive and visionary leadership to turn around the fortunes of a country whose economy was in a ditch.
It bears remembering that this NPP government came into office at a time when another government had thrown its hands up in despair and run to the IMF for a bailout and for what it called “policy credibility.”

The first task of any government should be to establish credibility in itself and in its ability to manage the affairs of the country.

It is a massive dent on the sovereignty of a country if its government looks for credibility from external sources.

We call on Ghanaians in this 2020 election cycle, to choose credibility over a lack of credibility. Indeed, this country had so lost its sense of credibility that it had to import plantain to feed its people.

It is the responsibility of governments to create the enabling environment for farmers to work to feed a nation.

The visionary and far-sighted leadership of Akufo-Addo through the planting for food and jobs programme has turned Ghana around from a net importer of food to a net exporter of food.

​Ladies and gentlemen of the media, the Akan people say that, “atiyi3 ma awir3fi3,” to wit, comfort engenders forgetfulness.

We have taken the new comfort for granted and have forgotten that it has not always been like this.

It has taken the vision and conviction of President Akufo-Addo to restore the dignity and sanity to our country and its people.

And it was not for lack of capacity. It was simply because the economy was in such a poor state, that the NDC government could not raise the money required to keep the lights on.

When we make the argument today, they tell us that they resolved dumsor before they exited. Here are the statistics for how many hours the lights were off in 2015, 2016 and 2017.

The empathy that President Akufo-Addo has for the rural people and his vision got him to institute the drone service for delivering critical medical supplies to remote areas of our country to save lives.

We have established drone delivery centres in Omenako in the Eastern Region, Walewale in the North-East Region, Mampong in the Ashanti Region and Sefwi-Wiawso in the Western-North Region.

To date, 79, 800 life-saving products have been delivered to 945 health facilities across the country, including 2, 500 COVID samples to two testing centres.

Just yesterday, Ghana’s drone delivery system together with that of Rwanda was the subject of a BBC documentary.

Today, Akufo-Addo’s leadership is being praised across the world, with his quotes making it into many write-ups and articles across respected journals.

Just go to youtube or google and search for the top ten most respected leaders across Africa and see how our President, Nana Addo Dankwa Akufo-Addo fares.

How come Ghana was not mentioned in that respect eight years, seven years or four years ago?

​Ladies and gentlemen of the media, President Akufo-Addo’s management of the COVID pandemic has been exemplary. Today, we are almost beginning to forget that the pandemic exists.

Indeed, in many parts of the world today, the pandemic still rages. When the President started to put in systematic and well-thought-out measures to contain the pandemic, and when he said that, “we shall defeat COVID-19 together, many took it as political talk. But he knew what he was doing.

From the partial imposition of a lock-down, to the easing of restrictions, to sending final year students to school, many Ghanaians were nervous and wanted us to copy other countries in the West Africa region who were hesitant to do same.

Indeed, some Ghanaians circulated videos of the Minister for Education of Nigeria, where he was saying that Nigeria will not let its final year students take their exit exams this year because it will be fool-hardy to do so and called on our President to follow suit and recall our students to school.

But our President of conviction stood his grounds. Today, Nigeria has followed Ghana’s example in letting her final year students write their exams.

A leadership of conviction is what it takes to steer a country out of troubled waters. Ghanaians can see clearly that there has been a leader of purpose and conviction in the management of COVID-19.

We thank God that Akufo-Addo is President at this time.

​In further empathy with the Ghanaian people, he gave us reliefs in respect of water and electricity.

And because people are compelled to work from home, the President has offered us a reduction in the cost of internet services by reducing the Communication Service Tax from 9% to 5%, effective today.

There is no better display of compassion than this, which other people are describing as a reckless sharing of what they call “freebies.” If giving out freebies is what it takes to show leadership of compassion, so be it.

​Ladies and gentlemen of the media, the people of Savannah, Oti, North East, Ahafo and the Western North had been clamouring for separate regions since the immediate post-independence era. Successive governments​ promised it and failed.

Akufo-Addo promised it and delivered it. It had to take the boldness of a leader with conviction and a leader with the right vision and attitude, to go through the constitutional motions required to see the realisation of this life-long dreams of millions of Ghanaians in these newly created regions.

The leadership of Akufo-Addo in this matter becomes even more glaring, when we remember that there was a son of the Savannah Region who was President, promised it and failed to deliver it.

Today, the people of Dagbon, refer to President Akufo-Addo as MALTI NAA, ABUDANI AKUFO-ADDO I. “Malti” in Dagbani means, one who repairs for.

Through the instrumentality of Akufo-Addo, the wisdom of the eminent chiefs and the willingness of the people of Dagbon, today a chieftaincy dispute that spanned several decades and outlived Presidents from Nkrumah to date, has been resolved.

I remember when President Akufo-Addo came to power in 2017 and said that he was determined to celebrate the Damba festival with the people of Dagbon in 2018, many people were sceptical.

For 18 years the people of Dagbon had not celebrated the Damba festival due to the conflict. But determined he was.

And even though he missed the 2018 date, in 2019, Akufo-Addo was guest of honour at the celebration of the Damba festival. Such is the vision and conviction of Akufo-Addo.

Ladies and gentlemen of the media, I could go on and on and on. But suffice it to say that, this country is at a crossroads- the COVID pandemic is still with us.

Our first batch of free SHS graduate are transitioning into university. All across the world economies are still in transition.

It needs a man of empathy and compassion. I can tell you without a shadow of doubt, that, that man is Nana Addo Dankwa Akufo-Addo.

For the first time in our fourth republican history, we have a President who in presenting a current manifesto spends time to outline what he has done with the previous manifesto and mandate. We invite our major opponent not to carry on as if he is a new candidate.

Let him have the courage to own his 2012 manifesto and tell us what he did with the 2012 mandate. That is the only way he can justify inviting us to interrogate a new manifesto.​

Ladies and gentleman, at the heart of every manifesto commitment is credibility. We are saying that, among the two leading contenders in this election, only Akufo-Addo has demonstrated credibility and therefore, who alone Ghanaians should trust with their mandate.

DISCLAIMER: The Views, Comments, Opinions, Contributions and Statements made by Readers and Contributors on this platform do not necessarily represent the views or policy of Multimedia Group Limited.
Tags:
2020 Elections
NPP
Press briefing