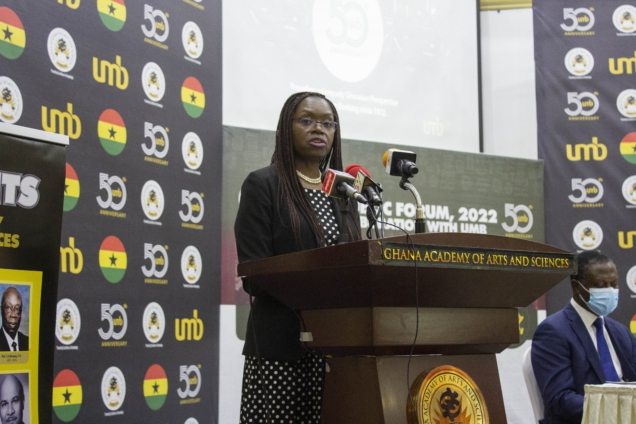 The first day of the prestigious Ghana Academy of Arts and Sciences (GAAS) 2022 Public Forum begun with concord that the African Continental Free Trade Area (AfCFTA)  presents the most exciting path for Ghanaian and African development in a generation.

The deliberations however noted the need for countries and public sector players to be aware of the challenges that will arise from this opportunity.

The forum is an annual event by the GAAS, as part of efforts to bridge the gap between Academia, Practice and the General Public.  This year’s sessions are scheduled from the 6th of June to the 8th of June and are sponsored by UMB, a leading indigenous Ghanaian bank, as part of its 50th anniversary celebrations.

The event was opened by a lucid and informative presentation by Beatrice Chaytor, Head, Trade Service Division at the secretariat, here in Accra. Madam Chaytor in her  presentation noted inter alia, that the AfCFTA project was on course, and over 40 countries were ready to begin offering preferential trade arrangements.

She noted that unlocking trade in Africa through practical measures like reducing the over 150 border land border checkpoints in Africa, could immediately unlock at least $70 billion in value to Africa. She said AfCFTA, which was easily the number 2 or 3 largest trade block in the world, had the potential of changing the under-development story of Africa in one generation.

Professor Charles Godfred Ackah, Associate Professor at the Institute of Statistical, Social and Economic Research (ISSER) of the University of Ghana, Legon, in his presentation, asserted that the AfCFTA needed to focus on manufacturing and industrialization, otherwise it would not succeed.

By way of equations and graphs, Professor Ackah proved his point to the audience, arguing that industrialization was correlated to the development of, for example, the fast-developing countries in Asia.

In his delivery, Lawyer David Ofosu-Dorte, Senior Partner, AB & David Africa, a noted expert on pan-african trade and laws, argues that the AfCFTA could prove to be the biggest opportunity for the private sector in markets like Ghana, but with that opportunity came challenges.

He noted that the services sector, especially banking, tourism, health and education, will and are enjoying a fillip from AfCFTA, as standards are homogenized, and barriers removed.

The Chairperson of the forum Emerita Prof. Isabella Akyinbah Quakyi Vice -President, Arts Section of the Academy in her closing remarks expressed GAAS profound appreciation to UMB for sponsoring the forum. She indicated that GAAS had been funding this solely for the last few years and urged companies to prioritize thought-leadership as it was key to their strategy.

Nii Amankra Tetteh, Executive Director, Business at UMB in response said the bank was proud to be a sponsor of the forum as part of its 50th anniversary. In addition, he said AfCFTA was key, and indigenous companies needed to be alive to the initiative as its impact was inevitable.

The Forum continues in Accra till Wednesday 8th June 2022 at the Academy’s auditorium.