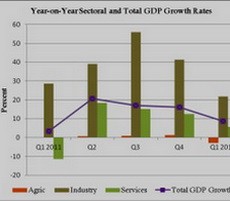 The economy expanded by 8.7% year-on-year in the first quarter of 2012, driven by strong industrial output and respectable growth in services, the Ghana Statistical Service (GSS) reported on Wednesday.

The rate reflected the slowdown expected in the pace of economic activity after the 16% surge in GDP during the fourth quarter of 2011 and the 14.4% expansion for the whole of last year.

Industrial output grew by 21.7%, led by mining and quarrying activities — which also includes oil production — as well as manufacturing.

The production of minerals soared in the first quarter, Magnus Ebo Duncan, head of economic statistics of the GSS, said at a news conference in Accra. He said gold output increased by 59%, and bauxite by 40%.

Services, which accounted for 48% of GDP produced in the first quarter, grew by 5.7% with personal service activities, business services, and transport and storage activities contributing to the jump.

The dark side of the data was agricultural-sector output which slumped by 2.9% in the first quarter compared to a year ago, the first quarterly drop since the final three months of 2007. The slide was the result of an 18% dip in fishing output, even as crop, livestock and forestry production increased.

The GDP report is consistent with the Bank of Ghana (BoG)’s reading of the pulse of the economy. At its monetary-policy briefing on June 13, the BoG said its composite index of economic activity picked up by 13.7% in real terms during March 2012, compared to 23.7% in the same period of 2011.

The BoG raised its key lending rate by 0.5 percentage points to 15% at the June 13 briefing, citing strong upside risks to inflation and weak downside risks to growth.

The move was also seen as an attempt to consolidate more stringent rate-hikes undertaken by the Bank at two previous meetings to curb money growth and stabilise the cedi’s exchange rate.

The cedi has incurred losses of more than 17% against the dollar in 2012, weakened by record-high demand for the greenback by importers and speculation.

The BoG has moved in aggressively to stem the fall, combining measures to boost the supply of dollars with strategies to mop up excess cedis held by banks and the public.

The Bank has since April withdrawn more than GH¢1.2billion in excess liquidity from the economy by selling higher-yielding securities to investors to reverse the flight to dollars.

It has also changed rules for holding foreign exchange reserve requirements by banks, and has said it is considering ways to minimise the flight of foreign currency from the banking system that often occurs through large over-the-counter withdrawals.

Consumer inflation remains in single digits but has risen for three consecutive months since March on account of the sliding cedi, reaching 9.3% in May from 9.1% the month before. The BoG is targetting an average inflation rate of 8.7% for 2012 and an end-year figure of 8.5%.