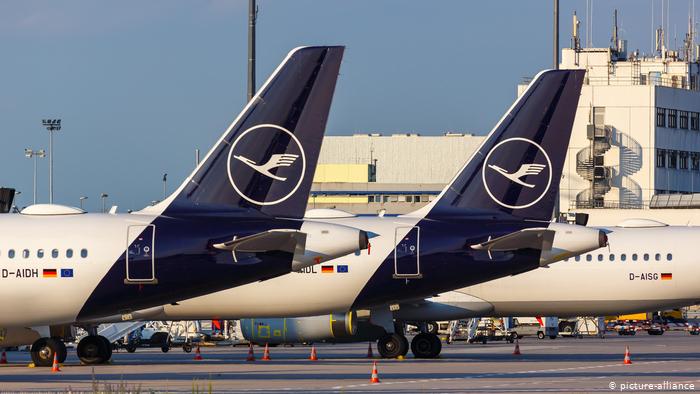 Hit by a slump in global travel demand, Lufthansa has posted a €2 billion loss for the third quarter of 2020. The firm plans to cut thousands of jobs as the coronavirus pandemic weakens its business outlook.

Lufthansa reported on Thursday a loss of nearly €2 billion ($2.3 billion) for the third quarter of this year as the German aviation giant struggles with slumping demand amid the coronavirus pandemic.

One of the largest airlines in Europe, which posted a €1.4 billion loss in the second quarter, will only fly at 25% capacity until the end of 2020.

Aircraft passenger numbers have slumped since the beginning of the year as pandemic curbs have grounded flights around the globe.

“We are now at the beginning of a winter that will be hard and challenging for our industry,” CEO Carsten Spohr said in a statement, warning of more “inevitable restructuring” to return the company to financial health.

But the return of restrictions in Germany, alongside even stricter lockdowns in countries such as France and Britain, has “significantly worsened” the outlook for air travel, the Lufthansa statement said.

The firm has previously announced plans to slash 22,000 full-time jobs across the entire Lufthansa Group, which includes brands such as Brussels Airlines, Swiss, Austrian Airlines and Eurowings. Lufthansa also says it will permanently reduce the size of its fleet by at least 100 aircraft.

The company expects to burn through €350 million a month until the end of December.

Lufthansa said it ended September with €10 billion of cash at its disposal, compared to €2.8 billion at the end of June.

The figure at the end of September includes €6.3 billion in “stabilization measures” in Germany, Switzerland, Austria and Belgium.

In April, the Cologne-based company shut its budget airline Germanwings as part of a cost-cutting drive just after the breakout of the COVID-19 pandemic.

It struck a €9 billion bailout deal with the German government in May to stave off collapse.

The German government took a 20% stake in the firm, which it intends to sell by the end of 2023.

Regulators at the European Commission approved the rescue package in June.

The International Air Transport Association, a global body representing the industry, has said that air passengers need to have easy access to rapid COVID-19 tests before they fly as way of sidestepping quarantine measures.

“People around the world have a great desire to travel again soon,” said Spohr. “The important thing now is to ensure health protection and freedom of travel, for example by means of widespread rapid tests.”