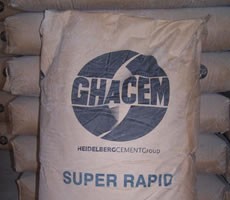 A global juror of Ghacem’s Quarry Life Award competition, Dr. Michael Rademacher who is also the Manager of Group Environmental Sustainability in Heidelbergcement Group of Germany, majority shareholders and owners of GHACEM Ltd., has paid a working visit to Ghacem.

The visit among other things aimed at assessing the rehabilitation and reclamation project of Ghacem as required by law, and also at visiting the project sites of Ghana’s top-5 finalists of the ongoing world-wide Quarry Life Award contest.

The Quarry Life Award Campaign (QLA) is a global competition organised by HeidelbergCement (HC) Group to source ideas toward the effective regeneration of biodiversity and management of its quarries across the globe.

HeidelbergCement operates more than 100 cement grinding plants and over 1,000 quarries in more than 40 countries. Ghana, represented in this case by GHACEM, is one of 18 countries participating in the QLA competition.

Ghana’s top-5 finalists in the competition include Japheth Roberts and team, whose project topic is “Impact of quarry on biodiversity: a case-study of the limestone quarry at Akosombo”; Paul K. Nsiah and team are working on “The potentials of pennisetumpurpureum (elephant-grass) as a biological geo-textile for stabilising slopes to promote biodiversity in reclaiming quarry sites”; Vivian Arthur and her team are working on “Top-soil characterisation for sustainable rehabilitation work at the Yongwa quarry to promote biodiversity”; Tarcisius Dapilah and team are working on “Reducing the negative impact of invasive species in communities around the Akosombo quarry”: and finally Abraham A.A Allotey and team working on “Integration of bee-keeping development as a tool for sustainable eco-management of the Yongwa quarry site”.

Top-notch executives of the QLA Project who accompanied Dr. Michael Rademacher included Mr. Joseph Mensah,the National Coordinator who is also the Environmental Health and Safety Manager of Ghacem; two national Jury members, Dr. Erasmus Owusu who is a conservation biologist and Mr. Yaw Kwakye, in charge of climate change at the forestry commission; Ghacem quarry manager Jens Wold; Richard Ago Nortey of the quality assurance department of Ghacem; and Benny Fiifi Ashun, a National Jury member and Communications Coordinator as well as Strategy and Corporate Affairs Officer at Ghacem.

There was an interactive session at the Akosombo Hotel led by Dr. Rademacher with the top-5 finalists, during which he wished them the best of luck and expressed the resolve of the jury members to ensure a free and fair platform for all participatory countries. It is however instructive to note that the expertise of the contributions from National Jury members was very much appreciated by all.

In an exclusive one-on-one with the National Coordinator, Joseph Mensah, he indicated that there will be a spectacular National Awards ceremony in the month of October to crown this year’s contest, which is the maiden contest of many more to come in the ensuing years, but was quick to add that details will be communicated in the national dailies soon.