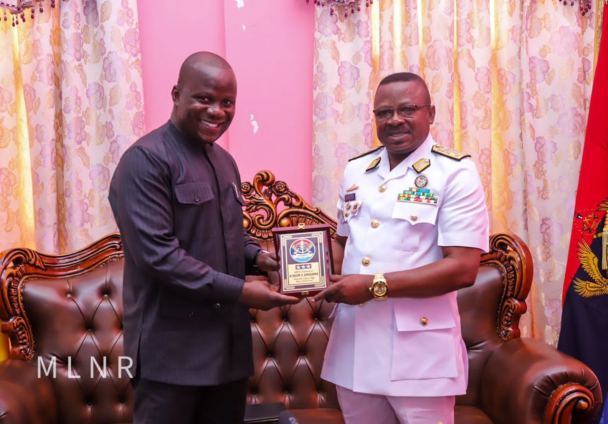 This came to light when the Minister for Lands and Natural Resources, Samuel Abu Jinapor (MP) paid a courtesy call on the Chief of Defense Staff to court support from the Military High Command and the rank and file of the Ghana Armed Forces (GAF) to support the 2022 Green Ghana Program.

The Minister said, “We cannot mobilise the major stakeholders of the country without the Ghana Armed Forces and so I’m here on behalf of the President to ask for the support of GAF with respect to the upcoming 2022 Green Ghana Day”.

The Green Ghana Day, the Minister said is a day that the President of the Republic has set aside for Ghanaians to plant 20 million trees.

He added that “last year, we planted five million trees, and this year, we have set a very ambitious target of planting twenty million trees on June 10, 2022”.

The Minister said after the review of the 2021 Green Ghana Day initiative, the Ministry has introduced the Compartment Forest Reserve System, where institutions can adopt compartments in degraded Forest Reserves across the country and co-own.

Samuel Abu Jinapor also called for a joint standing committee between Ghana Armed Forces, The Forestry Commission, and the Ministry to facilitate discussions and further implementation of activities on Green Ghana Day between the parties.

The Minister also used the opportunity to express his outmost appreciation to the Military High Command for their role in protecting the Natural Resources of the country and in particular, Operation Halt II, which is aimed at fighting illegal Mining.

The Chief of Defense Staff (CDS), Vice Admiral Seth Amoama expressed his deepest appreciation to Jinapor for choosing GAF to actively join the National exercise of planting trees, saying that it falls in line with the GAFs mandate to protect and preserve the territorial boundaries of the country which includes forests reserves and described the call by the Lands and Natural Resources minister as “a noble one”.

The CDS, also nominated Col. Richard Kinney, the Director of Lands at General Headquarters (Logistics) to represent GAF on the joint committee and hoped the collaboration between the two parties will help make this year’s tree planting exercise a success.

The CDS also used the occasion to present the Minister with a plaque for his maiden visit to the Military High Command.

He added that “we have two prompt strategies that are to plant 10 million trees in the forest reserves and 10 million for households, medians of roads, water bodies, schools, recreational grounds, degraded watershed areas, amongst others.

To help support the efforts of the Ministry, Mr John Allotey disclosed that all the 16 Regional Coordinating Councils have been briefed on the targets for the planting of 20 million trees and hoped that their role will help government’s aggressive afforestation drive and the quest to fight deforestation and climate change.

Also at the meeting with the CDS were the Deputy Minister responsible for Lands and Forestry, Benito Owusu-Bio, and Major General Nicholas Peter Andoh, Chief of Staff at General Headquarters.