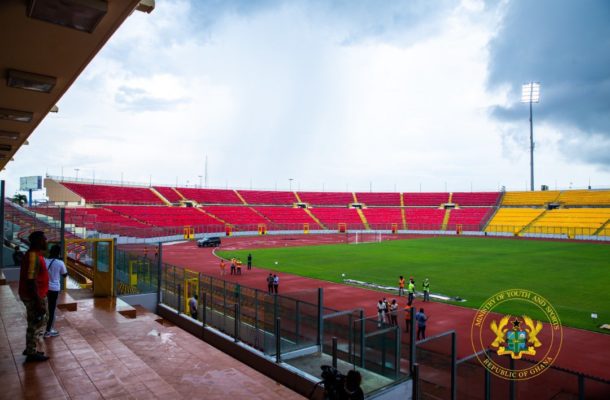 The Ghana Football Association (GFA) have made contact with the Confederation of African Football (CAF) over the possibility of moving the first-leg encounter of the game between Ghana and Nigeria to the Baba Yara Stadium, Joy Sports understands.

The Black Stars and the Super Eagles go head-to-head for a place at this year’s FIFA World Cup in Qatar, with the first encounter of the playoff scheduled to take place at the Cape Coast Stadium.

However, the state of the pitch, following the celebration of Ghana’s 65th independence anniversary on March 6, has raised doubts about the suitability of the game being played in Cape Coast.

Last week, the National Sports Authority revealed they had begun speedy work on the pitch to make it available in time for the March 25 first leg, but there fears the venue may still not be fit for purpose.

Prior to the Ghana Premier League matchday 20 fixture between Asante Kotoko and Bibiani Gold Stars in Kumasi on Sunday, a CAF representative was in attendance to inspect the Baba Yara Stadium and ascertain its condition.

The CAF inspection member was in the company of GFA deputy secretary, Alex Asante and the NSA director general, Professor Peter Twumasi during the inspection.

The CAF member, who is identified to be a Ugandan, was reportedly left satisfied with the condition of the venue.

It is important to note that although renovation works on the Baba Yara Stadium were recently completed, the facility has not been under consideration to host Nigeria because Ghanaian authorities did not submit it to FIFA as an option in time. FIFA requires that all match venues a member association would like to use for qualifiers be submitted 90 days to kickoff of the game.

As a result, any decision to use the Baba Yara Stadium will be outside the rules and at the discretion of FIFA.

Meanwhile, reports also say that the world football governing body may take the first leg away from Ghana altogether if the Cape Coast Stadium does not pass a fit and proper test – scheduled for Monday morning – and they cannot agree for the Baba Yara Stadium to be used as a last-minute substitute as well.

Joy Sports understands that should this happen, Ghana will have to choose venues in one of Cameroon, Benin or Morocco.

DISCLAIMER: The Views, Comments, Opinions, Contributions and Statements made by Readers and Contributors on this platform do not necessarily represent the views or policy of Multimedia Group Limited.
Tags:
Black Stars
GFA
Nigeria
World Cup Qualifiers