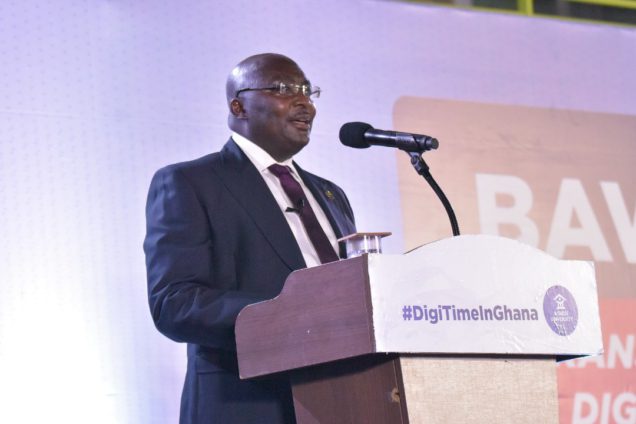 He made the statement while delivering a speech on the topic; “Transforming an economy through digitalization: The Ghana story” at the Ashesi University on Tuesday.

According to him, the incumbent government was able to attain this feat due to the mobile money interoperability (MMI) policy introduced.

This initiative, he said was implemented once government noted that there was financial exclusion because “it was not possible to send money to customers of different mobile money service providers.”

But “mobile money payments interoperability has made it possible to transfer money seamlessly across different mobile money providers and between bank accounts and mobile wallets,” he said.

The Vice President spoke highly of the Akufo-Addo-led administration and its successes, stressing that Ghana is the first country in Africa and one of the few in the world to achieve this type of interoperability between bank accounts and mobile wallets.

He continued: “Even in the USA, the Federal Reserve Bank does not have interoperability in its Real Time Payments Network.

The American Bankers Association in a letter to the Federal Reserve (Fed) in September 2021, called on the Fed to strive towards interoperability with the Real Time Payment Network.”

Meanwhile, all Banks in the country according to the Vice President, will in December launch a bank-wide mobile money wallet which will be available to customers and non-customers through a mobile app.

Users of the app will be able to move money from any bank or mobile money account into this wallet.