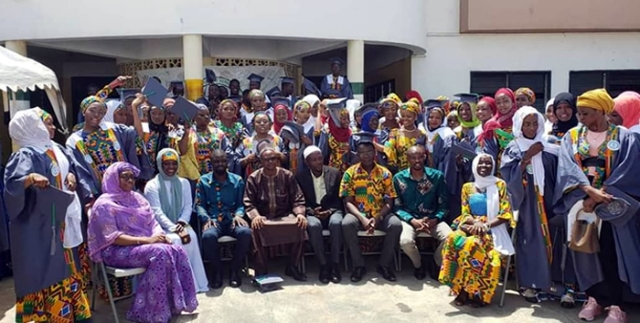 The Ghana-Lebanon Islamic School (GLIS) is optimistic that the class of 2019 will excel in the West African Senior Secondary Certificate Examinations (WASSCE).

At a graduation ceremony for the high school graduates last week Saturday, June 8, 2019, headmaster of the school, Mohammed Sumaila, reported that the 2017/18 batch of students performed creditably in the WASSCE as such the school was optimistic the 2019 batch will bring better results.

He urged the graduating students to keep the standard of GLIS aloft, having gone through rigorous training, inspired by the belief that no academic achievement is meaningful if it is not linked to the total submission of the will of Allah. “We have taught you what you knew not so that as you go out there to the larger community you will serve as the light in the world. We expect you to be the pivot around which good works in the community will result”.

On his part, the Director of the school, Bala Sa-ad, touted GLIS as a scholarly institution with high standards of academic excellence, having been the best Senior High School in Greater Accra Region in 2010 and 10th nationwide.

He observed discipline as the cornerstone of any academic pursuit, as such, he urged parents to join hands and support the school to help maintain the standard of discipline and academic work.

In a goodwill message, the outgoing Board Chairman of the school, Nouhad Kalmoni congratulated the graduates for undertaking the WASSCE successfully. He, however, cautioned them to eschew complacency and be reminded of higher levels of education ahead and update themselves continuously while waiting for the results.

He also commended the entire teaching staff for maintaining the educational standards in the school over the years and the entire Board for the support during his time of office.

Miss Aisha Ahmed, on behalf of the graduating class, expressed appreciation to the teaching staff for setting a good foundation for them as they move to greater heights and assured to maintain the moral standards they have been instilled with wherever they go.

In all 132 students made up of 36 males and 96 females enrolled in September 2017 and have completed their WASSCE, awaiting their results.

GLIS was established in pursuance of the society’s objective to provide quality and affordable education, youth moral training and structure particularly those from less privileged Muslim communities. It has a kindergarten, primary, JHS and SHS.

The school has adequate facilities including girls’ and boys’ hostels, a clinic, a sports centre and a school bus.