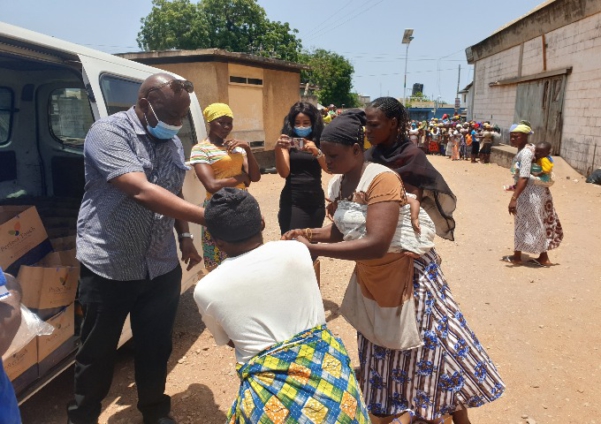 The Ghana Maritime Authority on Easter Monday offered about 300 head porters, locally known as ‘Kayayei’, with packs of hot meals.

The Director General of the Authority, Thomas Kofi Alonsi who personally presented the food to the Kayayei, said the GMA wanted to augment the government’s efforts at providing the vulnerable with decent meals.

The capital, Accra, and other parts of Ghana have been locked down as part of efforts to curb the spread of the Covid-19.

The Ghana Health Service reports that as of April 14, the country has 636 confirmed cases with eight deaths resulting from coronavirus related complications.

President Nana Akufo-Addo announced a lockdown in the capital and other cities which is now in its third week.

He also announced plans to provide the vulnerable with food daily in the affected parts of the country.

Mr Kofi Alonsi said the Kayayei are the most graphic illustration of the vulnerable which is the reason the Authority decided to target them for support.

The beneficiaries are largely from Yagaba, Kubore, Loagri, and other villages in the North East Region of the country.

In addition to the packs of food, Mr Alonsi also presented a few gallons of hand sanitisers and wipes to the leaders of the Kayayei to share amongst themselves.

He advised them to keep safe and limit interactions with others.

Jamila Wahabu, one of the leaders of the Kayayei from Loagri, expressed gratitude to Mr Thomas Alonsi and the Ghana Maritime Authority for the kind gesture.

She said the Kayayei are desperate because they are no longer able to eke out a living as they did before the lockdown.

Whatever little savings they made, she said, have dried up, leaving them at the cusp of starvation, the mercy of benevolent people, and dependent on government rations.

Any help, therefore, is welcome, she stressed.

DISCLAIMER: The Views, Comments, Opinions, Contributions and Statements made by Readers and Contributors on this platform do not necessarily represent the views or policy of Multimedia Group Limited.
Tags:
Ghana Maritime Authority
kayayei