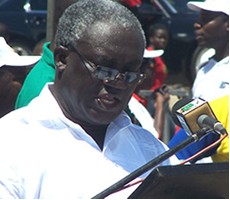 A meeting between the Trade Union Congress (TUC) and the Vice President Friday afternoon over the recent hikes in fuel prices is said to have ended inconclusively.

The meeting was prompted by ongoing nationwide consultations among labour unions to take a firm decision on what action to take to get government to revert to the regime of fuel subsidy.

Government had announced that the workers will be paid early this month. It is also increasing the fleet of buses for the Metro Mass Transit Company to mitigate the economic hardship brought about by fuel price increases.

But organized labour is not impressed about the move and is rather calling for the restoration of fuel subsidy.

He said union members complained that the increment had brought unbearable hardship on their families.

He said members are prepared to pressurize the government to restore the fuel subsidy.

A labour expert, Austin Gamey cautioned that issue of fuel subsidy should critically be examined by all parties making reference to the infamous TOR debt which almost succeeded in “dislocating the economy”.

He told Joy News that the nation was sort of ready for any move to avoid the re-occurrence of the TOR debt, “albeit in small bit so that the effect is not visited on ourselves in a quantity we cannot withstand.”

Mr Gamey asked that properly laid down structures, as stipulated under the Labour Act, must be followed to resolve disagreement involving organised labour, employers and government through the tripartite system.

Meanwhile, Abu Kuntulo, General Secretary Health Services Workers’ Union, maintained that when the government realised it was not in position to subsidise fuel prices, the government should have had “a wider and a broader consultation” by bringing together organised labour and various groups to dialogue.

“[Our] reaction is that the government do not have the interest of the people who have elected them into power, and therefore can just do anything that will come to worsen [their plight]”

Joy News has learnt that the meeting will continue on Monday.