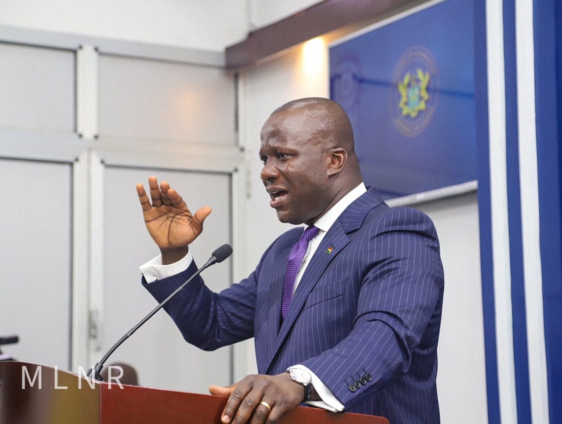 The Minister for Lands and Natural Resources, Samuel A. Jinapor has announced that government will on Monday, 25th July, 2022, inaugurate a National Planning Committee to implement the new flagship programme; the Green Street Project, which he said is intended to plant trees in the median and avenues of the regional capitals of the country.

He noted that the project which will be chaired by his Deputy, Benito Owusu-Bio will also see to the beautification and mordenisation of all major cities in Ghana including the capital cities – Accra, Takoradi, Kumasi, and Tamale, among others.

Speaking at the Minister’s press briefing at the Ministry of Information on 20th July, 2022, Mr Jinapor explained that “the strategy and the goal is to plant trees in the avenues and the medians of the various streets of our country.

He gave examples of countries that have employed similar strategies to beautify their cities saying “most of the developed countries have these instituted in their countries, London is an example, Paris is an example and even some African countries like South Africa.”

The Minister also catalogued a number of interventions in the Forestry sector over the last year, outlining some of them as an outright ban on the harvesting, salvaging, trading, exporting, and importing of Rosewood, the development of an ecotourism handbook, the suspension of all reconnaissance, prospecting and/or exploration activities in forest reserves, except in exceptional circumstances.

He also said the Forestry Commission has established a rapid response team, which is working with other security agencies, to ensure strict compliance with these bans, and to clamp down on all illegal logging activities.

He disclosed that Cabinet has, already, granted approval for the conversion of 156 timber concessions and permits into Timber Utilisation Contracts (TUCs), for consideration and ratification by Parliament, adding that “by the time we complete this process, we will become the first African country to meet the European Union’s (EU) requirement to trade in legal timber and the second in the World, next to Indonesia, and it will be a major boost to the fight against deforestation and forest degradation”

Still on the Forestry sector, Mr Jinapor said preliminary figures of the 2022 Green Ghana Project, show that over 25 seedlings were distributed on Green Ghana Day and urged all those who planted to nurture the trees to maturity.

He maintained that through a public-private partnership, government has established a 400kg capacity gold refinery, which is now fully completed, and ready to start refining gold the country’s gold, adding that the Precious Minerals Marketing Company is engaging stakeholders to create a central market place for Gold to boost the local trade in gold which he was optimistic reposition Ghana as the leading producer of Gold in Africa and the sixth in the world.

Highlighting the Diversification of the Mineral resources base, Mr Jinapor said Government is committed to diversifying our mineral resource base to include other minerals such as lithium, cobalt, clay, and salt, among others, sighting his recent presentation to parliament on the government policy for developing lithium and other green minerals, which are known as the minerals of the future as a key example.

Touching on development of Mining Communities, the Lands and Natural Resources Minister explained that the Minerals Development Fund continues to provide financial resources from Mineral royalties for the benefit of mining communities.

According to him, government is also committed to reconstructing the Appiatse community into a model Green community, emphasising that the construction of the community will commence in earnest.

As a more lasting solution to the pollution of river bodies, Minister Jinapor said, the Ministry has procured five patrol boats, which will be used by the security services to patrol and protect Ghana’s rivers.

“By next month, these boats will be deployed to Rivers Ankobrah, Prah, Birim and the Black Volta,” he touted.

The Minerals Commission is implementing the Minerals and Mining Regulations, 2020 (L.I. 2404) to track all earthmoving machines and equipment used in mining operations, to ensure that they are used in accordance with the law.

As part of the 100 mercury-free gold processing equipment, commissioned last year, 300 more of these equipment will be procured under the National Alternative Employment and Livelihood Programme (NAELP), for green and clean mining.

Responding to a question on the encroachment of public lands the Minister said no person other than the Lands Commission has the right to grant any interest in public lands.

“If I may say and for the avoidance of doubt, public lands continue to be the property of the Ghanaian people and they ought to be protected.”

Under section 236 of the Land Act, 2020 (Act 1036), he said “not only is the unauthorised occupation or transfer of public lands illegal and unlawful, it is also a criminal offence, punishable by a fine of up to One Hundred and Twenty Thousand Ghana Cedis (GHS120,000) or a term of imprisonment of up to 15 years.”

He said that the total digitisation of the Lands Commission of Ghana will be a ‘game changer’ to all land issues and therefore applauded the Lands Commission for relentlessly pursuing its digitalisation agenda to support government in achieving expeditious land service delivery across the country.

He said the Ministry through the Ghana Boundary Commission has brought some level of regulation and authority over ‘Dollar Power’ a town between Ghana and Cote d’Ivoire which is believed to have some gold deposits available.

“And in the near future, efforts will be made to Institute a well regulated a gold mining operations in the area.”

The programme was also heavily attended by all heads of the various agencies and directors of the Ministry.