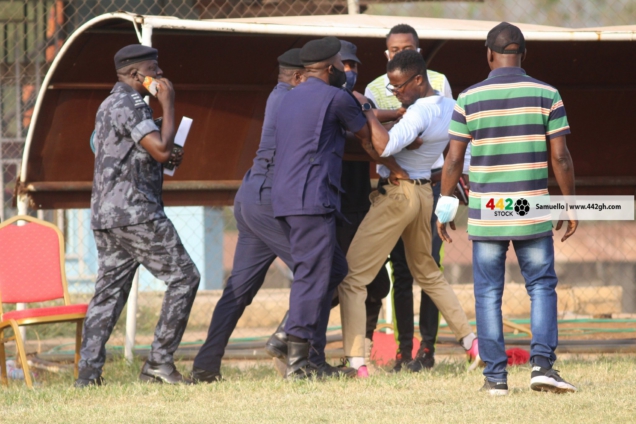 Eleven Wonders lost the game 3-1, however, Osei-Fosu was not happy with the assistant referee.

The linesman lost his cool and responded by also insulting the Eleven Wonders coach as an exchange of insults followed.

The altercation didn’t end there as Osei-Fosu approached the assistant referee after the game and attempted to hit him before police officers intervened.

The coach had to be aggressively dragged off the pitch to prevent any physical clash.

His side, Eleven Wonders took the lead in the game through Samuel Boakye. The home side then equalised through a penalty by Emmanuel Owusu Boakye with 15 minutes to play.

Hafiz Wontah Konkoni put the Hunters in front in the 83rd minute before Listowel Amankona put the game beyond Wonders with a sumptuous finish.

Bechem United move to the top of the table temporarily after their first win in 2021.