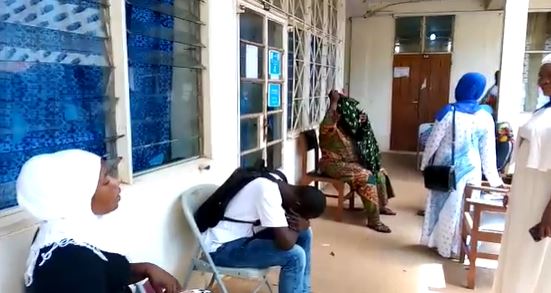 Staff of the National Board for Small Scale Industries (NBSSI) in the Northern Region have been sacked from their offices over allegations of giving loans to NDC faithful.

According to reports, the youth numbering about six stormed the office and demanded that they vacate the premises.

JoyNews’ Martina Bugri reported that the group locked up the place and left with the key.

The Board is currently running a disbursement programme for which reason prospective beneficiaries usually throng the offices for assistance in their application process.

One of such routines was underway at the NBSSI office, located at the ground floor of the Regional Coordinating Council building when the said development ensued.

Northern Regional Security Liaison Officer, Lt. Col. A.R. Salifu (Rtd) explained that he has called the leadership of the group, described as ‘The big six,’ for a meeting to understand the rationale behind their action.

“They should come so we discuss the issue so that we can find a resolution to that problem,” he said.

Speaking to journalists, Lt Col. Salifu (Rtd) describing the move as ‘childish enthusiasm,’ adding that “the action that they have taken is not proper… they need to be talked to.”

“During the discussion they even informed me that they and planned to move to Sagnerigu but I persuaded them not to do that.

According to him, the ‘Big Six’ is a known group in the area with an established office.

Northern Regional correspondent, however, added on Joy FM’s Midday News that “just when we were about to leave the Regional Coordinating council the youth arrived and were heading to the office for the said meeting.”

“I engaged one of them and they are denying that they are the people who locked this place,” Martina Bugri said on Tuesday.

DISCLAIMER: The Views, Comments, Opinions, Contributions and Statements made by Readers and Contributors on this platform do not necessarily represent the views or policy of Multimedia Group Limited.
Tags:
Loans
National Board for Small Scale Industries (NBSSI)
NDC