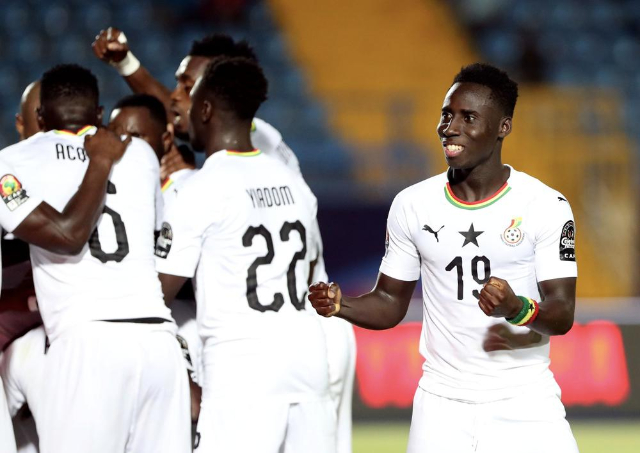 Jordan Ayew and Thomas Partey delivered Ghana into the knockout stages of the Africa Cup of Nations with second-half goals as they beat Guinea Bissau in their last group game at the Suez Stadium on Tuesday.

Kwesi Appiah’s decision to bring on Afriyie Acquah for Kwabena Owusu with 24 minutes left to play was absolutely spot on. Afriyie Acquah, who plays for Empoli in Italy, put up a great defensive performance, providing a pivot alongside Mubarak Wakaso to keep Guinea-Bissau out as the Black Stars run away with three points.

Thomas Partey does well in an advanced position

Acquah’s introduction pushed Thomas Partey into an advanced position in midfield and he delivered his best performance for Black Stars in the tournament thus far. He had struggled to influence games, producing listless displays playing in a deeper role alongside Mubarak Wakaso. But he had more influence on the game playing behind the forwards. Hopefully, Kwesi Appiah has taken note and will give him a similar role in the last 16.

Black Stars played like favourites in the second half

Kwesi Appiah’s charges were second best in the first half and were lucky not to concede. However, the second-half saw a vast improvement in the team’s performance as they scored two goals. Whatever Kwesi Appiah told the players in the dressing room at half time had a massive impact on the commitment of the players.

Gyan proving to be surplus to requirement

Asamoah Gyan got his first minutes of the 2019 Africa Cup of Nations against Cameroon as a second-half substitute. It was expected that he will build on that and get more minutes against Guinea-Bissau. However, Gyan was left as an unused substitute with other strikers in the team such as Jordan Ayew, Kwabena Owusu and Caleb Ekuban getting a runout.

Despite keeping a clean sheet in the game, the warning signs were clear. For the third consecutive game, Kwesi Appiah reshuffled his centre back pairing and it is clear there is a lack of telepathy. Against Guinea Bissau, the Ghana defence had moments with lapses in concentration that went unpunished. Going forward, Ghana will need to improve defensively to stand a chance.