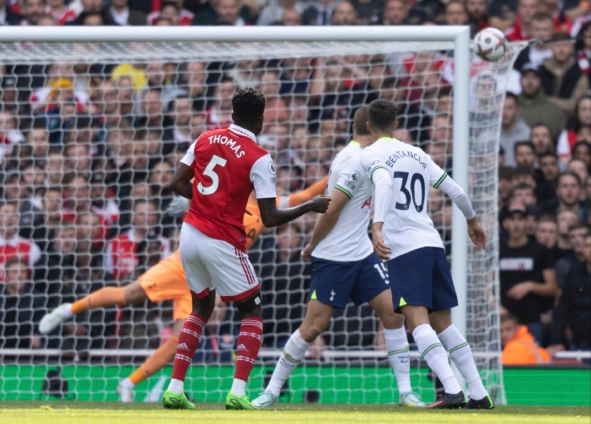 Arsenal boss, Mikel Arteta, is pleased midfielder, Thomas Partey, got off the Gunners to an electric start in the North London derby.

Arsenal earned a 3-1 result over Tottenham to continue an impressive start to the season, a performance which saw them extend their stay on top of the Premier League table. Granit Xhaka and Gabriel Jesus got themselves on the scoresheet after Harry Kane converted from the penalty spot to cancel out Partey’s opener.

And even though the England captain succeeded in doing that on paper, the magnitude of Partey’s goal could not be lost on Arteta.

“It was a great goal. We’ve been waiting for that one, the whole crowd has been ‘shoot! shoot!’ for a long time. For what he has been through and the injuries, and effort he put this week to be available for the team, I am so happy for him. He deserves it,” Arteta said in his post match press conference.

Besides expressing delight in Partey’s goal, Arteta also close to confirmed the motion of Black Stars fans, who indicated the midfielder’s unavailability in friendly games with Brazil and Nicaragua right before the North London derby, was suspicious.

It was later revealed the midfielder was omitted from Ghana’s starting team in the defeat to Brazil, as a precautionary measure after he felt discomfort around his knee. He departed the team’s camp back to London, days before the win over Nicaragua.

Black Stars head coach, Otto Addo, is expected to name his final squad for the 2022 World Cup before Ghana’s final pre-World Cup friendly with Switzerland on November 17. It is expected Partey makes the final list despite his recent injury record.

DISCLAIMER: The Views, Comments, Opinions, Contributions and Statements made by Readers and Contributors on this platform do not necessarily represent the views or policy of Multimedia Group Limited.
Tags:
Mikel Arteta
north London derby
Thomas Partey