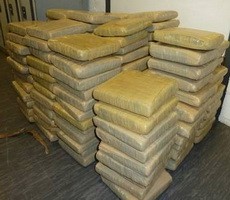 The alleged mastermind of the 1.5 tonnes of cannabis and 7.5 kilogrammes of cocaine exported to the United Kingdom from Ghana has been arrested.

Francis Kwame Asante, alias Wofa, 64, was busted in an operation by officials of the Narcotics Control Board (NACOB) and the Bureau of National Investigations (BNI).

Although Asante’s accomplice, identified as Frank Kofi Amoah, a freight forwarder, managed to escape, his bank accounts have been frozen.

Border officials of Her Majesty’s Government last month busted 1.5 tonnes of compressed cannabis in tape-wrapped packages within boxes of vegetables from Accra.

Five officials of NACOB have already been interrogated in connection with the seizure. They were said to be on duty at the time the aircraft took off from the Aviance Cargo Village at the Kotoka International Airport in Accra.

The Deputy Executive Secretary of NACOB, Nii Lante Blankson, told the Daily Graphic in Accra yesterday that “the latest arrest is part of the processes to establish how the drugs escaped the watch of officers who were on duty”.

He said Asante’s arrest also confirmed the determination of the security services to fight the drug menace.

“We are closing in on a few deviants who want to use our ports as a transit point in their nefarious, unlawful criminal acts,” he said.

Nii Blankson said there was renewed collaboration between Ghana and other countries aimed at fighting the menace, stressing, “Even those who commit the crime and escape the eyes of the Ghanaian authorities will be arrested once we identify them.”

He denied reports that the scanner at the port was not functional when the drug was being exported.