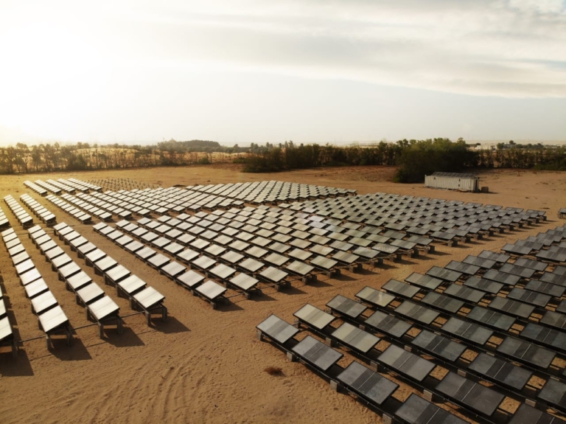 Would you believe it if someone told you that clean, sustainable drinking water could be created out of thin air?

However, due to the fact that more than two billion people on Earth live in water-stressed nations, experts are working to address a problem that is only expected to worsen due to global warming and population growth.

By using the sun to draw moisture from the air, hydropanels developed by the Arizona-based company source supply clean drinking water to many of the regions of the world that are in dire need of it.

The technology is comparatively simple. Each panel has fans that pull in outside air and force it through a substance that absorbs water, keeping the vapour in the air. Using solar energy, the vapour is subsequently transformed into a liquid and collected in a reservoir. The water is subsequently treated with calcium and magnesium to maintain purity and improve flavour.

The hydropanels can deliver clean drinking water almost everywhere because each panel, which costs $2,000 apiece, can run fully independently of other existing infrastructure and produces roughly 1.3 gallons of water per day.

In a zoom interview with JoyNews on September 17, 2021, Chief Revenue Officer at SOURCE Global, Robert Bartrop,  stated that the company is purpose-driven to partner with the government of Ghana in providing an independent source of drinking water for schools and rural communities.

“Ghana would be a great opportunity for us giving the number of challenges there with drinking water in the remote parts of the country.”

Robert says they are looking for people in Ghana who want to resolve the water challenge adding that, the government can approach them to facilitate the introduction of the technology into the country.

“They can approach us so that we can invest in the water infrastructure so we allow the end users to pay for it.”

The hydropanels can deliver clean drinking water almost everywhere because each panel, which costs $2,000 apiece, can run fully independently of other existing infrastructure and produces roughly 1.3 gallons of water per day.

SOURCE water costs approximately $0.15 per liter, while the cost of bottled water is generally above $0.50 per liter.

Bottled water is frequently an option for safe drinking water in locations with water shortages. However, given that over 80% of plastic water bottles end up in landfills, this could make the problem of plastic waste on the globe worse. However, during the course of its 15-year existence, a single SOURCE hydropanel replaces the need for 54, 000 single-use plastic bottles.

SOURCE says its hydropanels are being used in 50 countries, providing water to some of the areas that need it most.

Although water provided by existing centralised infrastructure may be cheaper, it is not always suitable for consumption.

Robert says the technology introduced in Ghana will solve water challenges in schools and rural communities.

Source Global’s Founder and CEO, Cody Freisen has dedicated his career to inventing technology that addresses the world’s biggest challenges.

While traveling the world with the company, he was struck by the massive impact access to clean, safe water has on not just health, but economic opportunity and social equity.

He, therefore, asked himself how they could make water the most vital and constrained resource on the planet renewable.

The answer to those questions is the SOURCE Hydropanel, which Cody created in his lab at Arizona State University.

DISCLAIMER: The Views, Comments, Opinions, Contributions and Statements made by Readers and Contributors on this platform do not necessarily represent the views or policy of Multimedia Group Limited.
Tags:
Hydropanels
Plastic waste