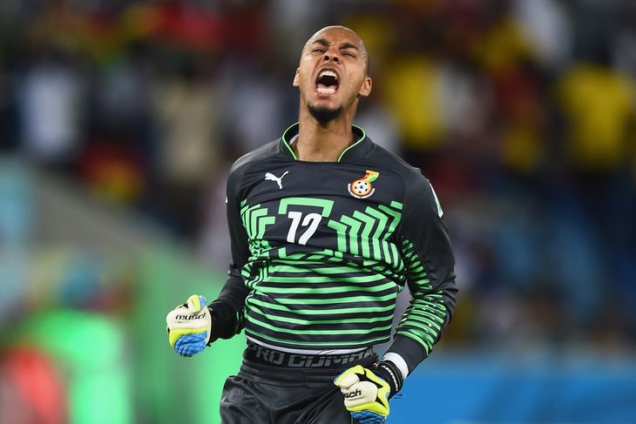 Adam Kwarasey has made 24 appearances for Ghana

Norway-born goalkeeper Adam Kwarasey has said that he does not regret playing for Ghana contrary to claims by Odartey Lamptey.

“That is not true at all. I’m really happy and grateful that I have been allowed to represent Ghana. I love wearing that jersey and, for me, that was the only thing I have ever wanted in terms of national team football,” Kwarasey told Citi Sports.

The former Ghana international is reported to have said that Kwarasey regrets choosing Black Stars over Norway.

Kwarasey was born in Oslo to a Ghanaian father and Norwegian mother. But decided to pledge his international future to the West African despite representing the European at youth level.

He made his Black Stars debut in 2011 and became the first choice prior to the 2014 World Cup in Brazil. However, his last appearance was at the tournament.

Since then, he has not featured for the Black Stars, with Lamptey quoted as saying that Kwarasey now regrets his decision.

“I know where Kwarasey came from and all that. If Kwarasey decides to open his mouth and tell you what he went through. He regrets playing for Ghana,” Odartey is quoted by Modern Ghana as having told Akoma FM.

He is reported to have said that in reaction to reports that the Ghana Football Association (GFA) is finding it difficult to convince some foreign-born players to play choose Ghana.

Early this month, Executive Council member George Amoako said talks about juju in Black Stars camp is one of the factors making it difficult for the association to secure the players.

Related: 10 players Black Stars could miss out on due to ‘juju’ perception

Kwarasey, now 32, plays for Norwegian top-flight club Vålerenga Fotball. In the same interview, Kwarasey said he wouldn’t turn the opportunity to play for Black Stars if he is invited.

“If I’m fit, I will always do that. If I play or not doesn’t matter for me as long you make a decision that you think is best for the team.

“And of course, if I’m the one chosen to play, prepare me for the game so I can have the best possible preparations to have a good performance for our team,” he said.

Kwarasey has made 24 appearances for Ghana, keeping seven clean sheets and conceding 18 goals.

He is best remembered for man-of-match performance against Brazil in a friendly match in 2011.

In that match, he produced spectacular saves to deny legendary Ronaldinho a goal. Brazil though won the match 1-0.