Indian Wells: Cameron Norrie through to fourth round but Dan Evans knocked out 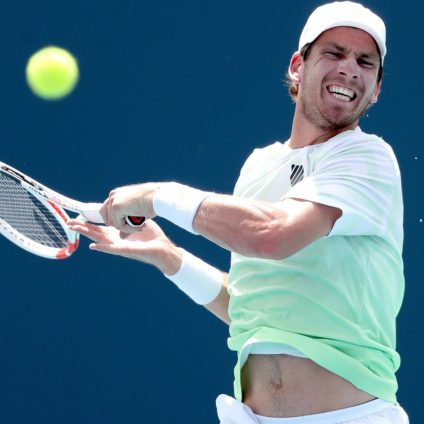 British number two Cameron Norrie battled to victory over Spain’s Roberto Bautista Agut to reach the fourth round of the Indian Wells Masters.

His win came after British number one Dan Evans was knocked out in the third round by 11th seed Diego Schwartzman.

Evans was two service holds away from victory but the Argentine recovered to seal a 5-7 6-4 6-0 win.

Victory marked a 43rd win of the season for 26-year-old Norrie, who has risen to a career-high 26th in the world.

Meanwhile in the women’s draw at Indian Wells, top seed Karolina Pliskova was knocked out by unseeded Brazilian Beatriz Haddad Maia, who won 6-3 7-5 to progress to the fourth round.

Lucky loser Haddad Maia – the first Brazilian woman to beat a top-three player – will face Anett Kontaveit in the last 16 after the Estonian knocked out Canada’s defending champion Bianca Andreescu.