Is it safe to reopen schools? These countries say yes 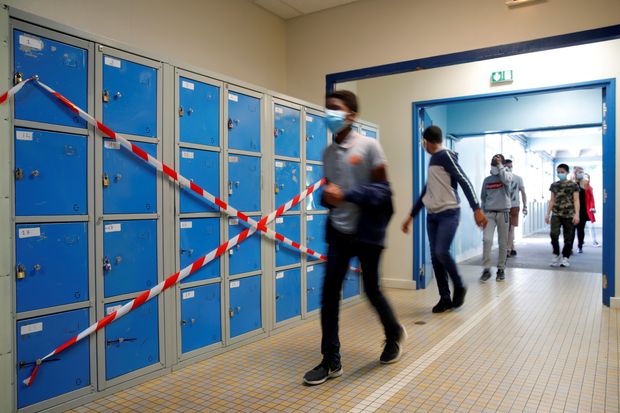 A number of countries that have reopened schools in the past two months have reported no resulting increase in coronavirus infection rates, an encouraging sign for authorities around the world that are contemplating how and when to safely bring children back to the classroom.

Authorities in many hard-hit countries such as Italy and the U.S. have so far resisted reopening schools for fear of triggering an increase in infections. In the U.S., schools have been drawing up plans to reopen in September, partly based on the experience of other countries.

Researchers and European authorities said the absence of any notable clusters of infection in reopened elementary schools so far suggested that children aren’t significant spreaders of the new coronavirus in society.

They acknowledged that their findings might change with the onset of winter and cold weather, and a recent outbreak at a Jerusalem high school affecting students and staff was a reminder of the higher risk to teenagers and adults.

But Denmark, Austria, Norway, Finland, Singapore, Australia, New Zealand and most other countries that have reopened classrooms haven’t had outbreaks in schools or day-care centres.

Students at a school in Nantes, France, faced new restrictions on May 20.

In Denmark, the opening of schools had no impact on the progress of the epidemic, said Tyra Grove Krause, a senior official with the State Serum Institute, the country’s disease control agency.

Denmark became the first Western country to reopen schools on April 15 and maintains a sophisticated monitoring system to detect any increase in infection and identify its source.

“Our interpretation is that it may be that the children aren’t that important for the spread of infection,” Dr. Krause said. Infections in Denmark among all age groups have been decreasing since schools reopened, she added.

Denmark has imposed a number of precautions on teaching establishments, from maintaining air circulation to rules on distancing and hygiene.

In Norway, the government won’t close schools again even if the number of cases starts rising in the country because there have been no negative consequences from reopening schools on April 20, said Education Minister Guri Melby.

Since Austria reopened on May 18, no increase in infections has been observed in schools and kindergartens, a spokesman for the government said.

Schools in some German states have been open for almost a month. While Germany has since experienced outbreaks at slaughterhouses, migrant shelters, a church and a restaurant, schools have been spared.

Finland hasn’t recorded any increase in infections since it reopened schools and day-care centers on May 14, Mika Salminen, director of health security at the Finnish Institute of Health and Welfare, said on Thursday.

Why children rarely develop serious Covid-19 symptoms, how susceptible they are to getting infected and why they don’t appear to be effective spreaders of the disease are among the most discussed riddles of the epidemic among scientists.

One reason for the absence of infections in schools could be that children below 10 have fewer of the receptors the virus uses to enter the body, said Prof. Herman Goossens, a medical microbiologist and coordinator of a European Union task force for researching Covid-19.

The number of so-called ACE2 receptors in some cells in the upper respiratory tract that the novel coronavirus uses as a gateway only starts to increase from the age of 10, making younger children comparatively less susceptible, he said.

His advice to EU governments: Bring children up to the age of 12 back to school.

Data from around the world showed children in this age group accounted for less than 1% of total infections, Prof. Goossens said.

Initially, many countries based their decision to close schools on their experience with influenza, which children are susceptible to and can easily pass on to adults. Prof. Goossens said the new coronavirus seemed to behave more like the bacteria that cause tuberculosis; children between 5 and 10 years old are less susceptible to TB bacteria and hardly pass it on to others even if they get infected. He cautioned that more research is needed into the possible role of asymptomatic children in spreading the virus.

The southern state of Baden-Wurttemberg, one of the hot spots of the epidemic in Germany, became on Tuesday one of the latest to announce it would reopen schools after a preliminary local study found that children were highly underrepresented among Covid-19 patients.

German Health Minister Jens Spahn cautioned in a broadcast interview on Thursday that “the state of science at the moment doesn’t allow for any real conclusions about how much children contribute to the spread of the virus…. There are different assessments and that makes it especially difficult to make political decisions.”

In some countries, sporadic infections have happened among schoolchildren and staff, but none have been reported to have resulted in bigger infection clusters. In France, after schools reopened on May 11, several closed after around 70 reported infections in schools and preschools nationwide. Almost all were adults, local authorities reported.

Sweden is the only Western country that hasn’t introduced a lockdown during the coronavirus pandemic, and its schools have been open throughout. There have been no notable outbreaks involving children, though a school in the northern city of Skelleftea made national news when a teacher with underlying health conditions died after becoming infected.

The teacher had worked in a primary school where 18 of 76 faculty members later tested positive, forcing it to shut down. It is unclear whether children or teachers spread the virus, said Thomas Ekholm, local chairman of a teachers union. He said the union wasn’t aware of any other outbreaks at Swedish schools.

Mr. Ekholm and other union leaders published a letter in Swedish newspapers in early May that called for principals to allow instructors in high-risk groups to teach from home. In Germany, teachers can be exempt from returning to school if they can prove they would be at high risk if infected with the new coronavirus.

DISCLAIMER: The Views, Comments, Opinions, Contributions and Statements made by Readers and Contributors on this platform do not necessarily represent the views or policy of Multimedia Group Limited.
Tags:
Schools reopening