Italian Town bans Google Maps use after too many tourists get stranded - MyJoyOnline.com 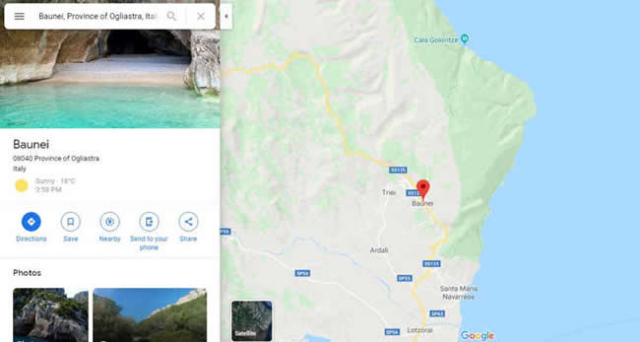 Baunei, an idyllic mountain village on the Italian island of Sardinia, has launched an appeal to visitors asking them to stop relying on the directions of Google Maps when driving around the area.

Salvatore Corrias, the mayor of Baunei, claims that in the last year alone the local fire service or mountain rescue team have been called 144 times to help stranded tourists who had followed the directions of Google Maps.

Apparently, people are often using the GPS-powered app to reach so-called “hidden beaches” around Baunei and end up driving down lanes that are unsuitable for cars or onto off-road tracks. To stop this from happening, local police have put up signs that read “Do not follow the directions suggested by Google Maps”.

“What happens is that people aren’t used to the dirt roads in the area and so rely on Google Maps,” Mayor Corrias told The Guardian. “But after a while they realize that they are not on a proper road, and so we have to go and rescue them.

We have had so many instances, especially in recent years – unfortunately Google Maps does not take people to the places they want to go.”

Rescue services are funded by the local community, so stranded tourists don’t have to paid for getting rescued. Only the number of rescue operations has become so great that it’s putting a serious strain on the local budget. The problem has become so serious that Baunei authorities have even contemplated banning the app, which it turns out is impossible.

“It’s not possible for us to ban its use so this is a warning: do not use Google Maps as you’ll end up in an obscure place. It just requires a little common sense,” Salvatore Corrias said.

Baunei authorities have alerted Google about the problems their free navigation app is causing, but so far they’ve received no reply. In the meantime, the town is setting up more road signs and kick-starting an information campaign on social media to deter people from using Google Maps in the area.

“The old paper maps are better, or better still, use an expert local guide from our area,” the mayor of Baunei advised tourists.