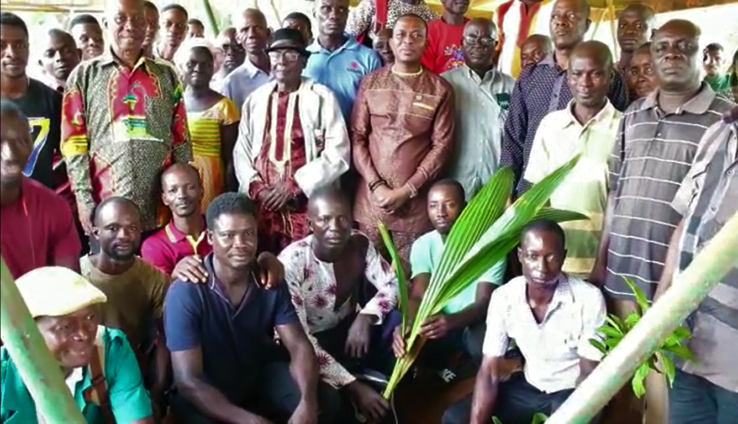 Andrew Bediako, MCE, Jaaman South, in a group picture with some beneficiary farmers

As part of the Planting for Export and Rural Development programme, the Jaman South Municipal Assembly in the Bono Region, has presented over 40,000 mango and coconut seedlings to farmers in the area.

The main crop in the municipality is cashew, and the farmers often go through economic hardship when the cashew season ends with nothing meaningful to do.

But in a move to improve the economic fortunes of the farmers, the Municipal Chief Executive, Andrew Bediako, presented mango and coconut seedlings to farmers to plant.

Speaking at a short ceremony at the Assembly’s forecourt at Drobo, he said the programme would serve as an alternative source of income for the farmers, especially after the cashew season, and called on the youths in particular to embrace the opportunity.

“The cashew farming is seasonal. Farmers go through financial hardships, especially from June-July until sometime in January-February. So there was the need to introduce another cash crop to mitigate the situation,” he said.

Mr. Bediako further explained that mango and coconut were considered because they will do well on the same land on which cashew is planted.

“So they can have yields from all these crops to alternate throughout the year and the proceeds would go a long way to stabilize their finances,” he noted.

“Government brought the seedlings under the Planting for Food and Export programme. Inspectors will be coming from Sunyani and Accra, and I have told the Extension Officers that they would be in trouble if the farmers collect the seedlings and they fail to monitor their planting,” he said.

Some of the beneficiary farmers commended the government for the initiative which would positively engage them and offer additional income, especially during the lean season of the cashew farming.

“Farming is what our fathers and forefathers did, and it benefited them during their old age as well as the municipality. I also want a better life, hence my decision to be part of this programme,” a taxi driver venturing into farming, said.

“It takes visionary leaders to introduce this programme because, at the end of the cashew season, farmers go through a lot of hardships. Interest on loans to start another season is unbearable, so the mango and coconut farming is a great addition and we are thankful to the MCE and the government,” another farmer said.

Meanwhile, the Assembly also presented 500 school desks to the District Education Directorate for onward distribution to basic schools in the municipality.

According to the Jaman South MCE, Andrew Bediako, this would ease the challenges posed by insufficient furniture in some of the schools and improve teaching and learning.

DISCLAIMER: The Views, Comments, Opinions, Contributions and Statements made by Readers and Contributors on this platform do not necessarily represent the views or policy of Multimedia Group Limited.
Tags:
Bono Region
Desks
Jaman South Assembly
Seedlings