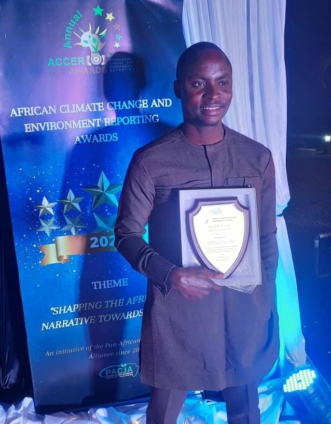 His news feature on how young female engineers are mitigating the threats of Ghana’s automobile carbon footprints through solar vehicles was among the best acclaimed news features selected by the judges for this year’s award.

“Charles Ayitey’s report brings a new dimension to how young African women are leading the charge through STEM in mitigating climate change. It was a rigorous selection process and for Mr. Ayitey to emerge the 1st runner up among over 20 competitive news features, explains the weight of his report,” Chair of the panel of judges, Prof. Kioko Ireri stated.

This ACCER Award is an initiative of the Pan African Climate Justice Alliance (PACJA), Africa’s largest coalition of civil society groups, faiths and community based organisations, academia, researchers and individuals who advocate for fair and just climate regimes for African people.

This year’s awards was hold at a time when Africa is preparing to host the 27th Conference of Parties to the UN Framework Convention on Climate Change in Egypt later in the year.

The goal and inherent intention of ACCER is not only to reshape the African narrative as espoused in Climate Change and Environment debates, but also to build a new culture and consciousness on how biological resources are utilised in the environment as well as reduction in carbon footprint.

In addition, the decision to launch ACCER Awards was informed by the realisation that CSOs and governments were limited in raising the needed level of awareness on climate change.

“The decision to launch ACCER Award was influenced by the 4th Report of the Intergovernmental Panel on Climate Change (IPCCC) which projected Africa as the region set to suffer the most by the climate change phenomenon,” said Charles Mwangi, the Acting Executive Director of the Pan African Climate Justice Alliance.