KATH striking surgeons: No one can force us to resume work - MyJoyOnline.com

KATH striking surgeons: No one can force us to resume work 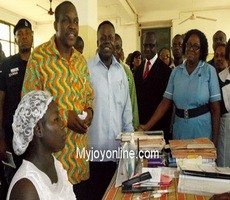 Striking surgeons at the Komfo Anokye Teaching Hospital say they will not compromise on their stance until authorities address poor facilities at the hospital.

The doctors have been protesting break-down of equipment, shortage of key medicines and erratic utility supply, among others.

Chief Resident Surgeon, Dr. Benjamin Frimpong-Twumasi, says no amount of persuasion or compulsion can get them back to work until authorities fix the problems.

The Komfo Anokye branch of the Junior Doctors Association was the first to declare an indefinite strike on Tuesday over the concerns.

The Surgery Directorate joined the action later in the day whilst management was making efforts to get the junior doctors to call off their action.

Dr. Frimpong-Twumasi says he and his colleagues will not budge but will keep off the job to back demands for immediate solutions to prevent more people dying in their hands.

“A 17-year old boy comes with a complicated hernia and the surgery was quite successful but because specific drugs were not available, they (team of doctors) improvised so after the surgery which took only one and half hours, for two-hours there was no sign of recovery in this patient. He woke up and vomitted all the contents and they went straight into the lungs and caused his death. A 17-year old shouldn’t die of strangulated hernia,” he said.

Meanwhile, Board Chairman, Dr. Louis Bartels De Bordes, says the doctor’s action is illegal and an exercise in futility.

Dr Bartels Des Bordes at a media briefing on Tuesday, chastised the striking doctors for going to the media with their grievances.