Girls in Kenya’s biggest slum are breaking their silence about parental and sexual abuse, thanks to “talking boxes” placed in schools where they can share their secrets, writes the BBC’s Ashley Lime in the capital, Nairobi.

“When my father goes out to the bar to drink alcohol, he comes back very angry and threatens to kill me, my mother and my sister,” a 14-year-old girl anonymously wrote in a note she put in what is called a “talking box” at her school in Nairobi’s Kibera slum.

“For a long time I had no-one to talk to and bottled up my issues. But when the talking box was introduced in our school, I was able to speak out by writing on a piece of paper and depositing it into the box, without having to reveal my identity,” she added.

The metal boxes have been installed in 50 schools across the vast slum by a UN-funded non-governmental organisation, Polycom Development.

Girls write down their problems or questions on pieces of paper and post them through a slot in the boxes, which are often placed outside bathrooms or in other discreet locations to give them more privacy, especially in mixed-gender schools.

“When I started working with the girls, I noticed that girls with serious issues never used to talk,” Polycom Development founder Jane Anyango told the BBC.

“Mostly the girls who would speak were girls who didn’t have weighty issues in their hearts. And that is why I thought of coming up with a way of listening to these girls,” Ms Anyango added.

Local volunteers trained as mentors read through the hundreds of messages posted every week, deciding how best to act on them. 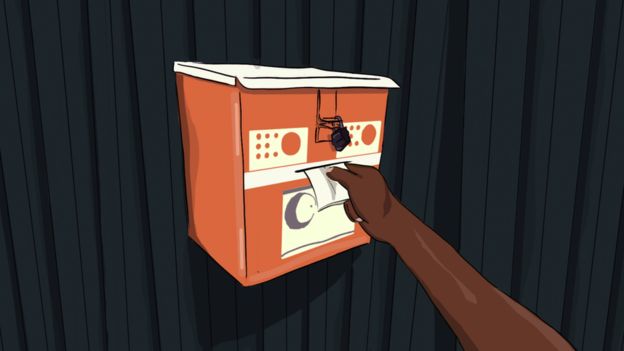 As the 14-year-old never came forward to confide in her mentors, all girls and their parents were invited to school for a discussion about family life, with the men warned not to abuse their wives and children.

Sexual harassment is a recurring theme in the notes. 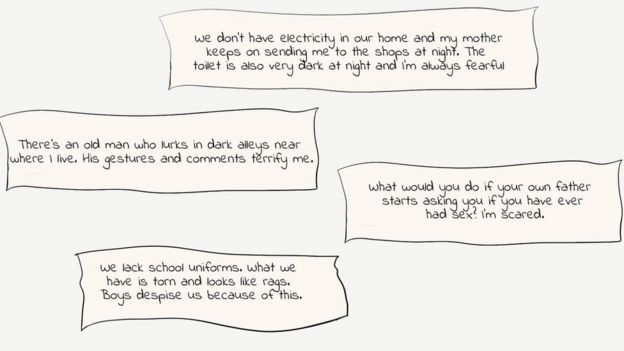 Many of the issues raised involved poverty and sexual abuse

A 2010 report by rights group Amnesty International indicates violence against women and girls is endemic in slums, and is linked to the lack of access to sanitation and public security.

Another report released in 2014 by the African Population and Health Research Centre shows in Kenya about 30% of young people aged between 10 and 24 are urban slum dwellers.

The report said, “they are often at risk of extreme poverty, poor schooling outcomes, early marriage, illiteracy, sexual and gender-based violence, and lack of access to essential services and amenities.”

Ms Anyango said that when schoolgirls come forward to report sexual abuse, mentors refer them to other organisations which could arrange counselling or assist them to file a case with police.

“We realised that when we dealt directly with the cases the schools tended to bar us from accessing their students. They told us we were bringing confusion into their institutions,” she said.

Not all the notes are about abuse. Sometimes the girls just have questions that they feel embarrassed to ask in person.

When the BBC joined mentor Leah Adhiambo on a visit to one of the schools, she unfolded crumpled pieces of paper and read out a message in the dimly-lit classroom.

“What is pregnancy and how can one get pregnant?” a girl had asked. 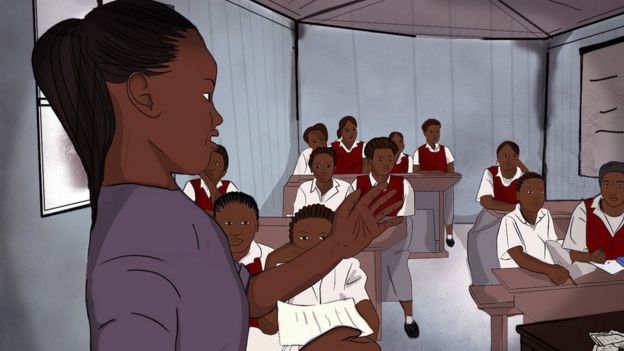 A few hands shot up among the class of girls aged between 13 and 15 and Ms Adhiambo picked a pupil to answer the question.

“Pregnancy is when you have something living in your stomach,” shouted the girl as the others mumbled and giggled.

“You become pregnant when a male cell and a female cell meet,” another said.

Ms Adhiambo nodded in approval and gave more details of how a baby is born, touching on a subject that is taboo in many homes in Kibera.

Through her work, she and other mentors play a vital role in empowering girls and protecting them from abuse.

For the 14-year-old with an abusive, drunken father, even the act of writing down her fears and feelings seemed to be therapeutic.

“I now feel free because I can express myself and get help. We feel more comfortable. We feel happier,” she wrote.