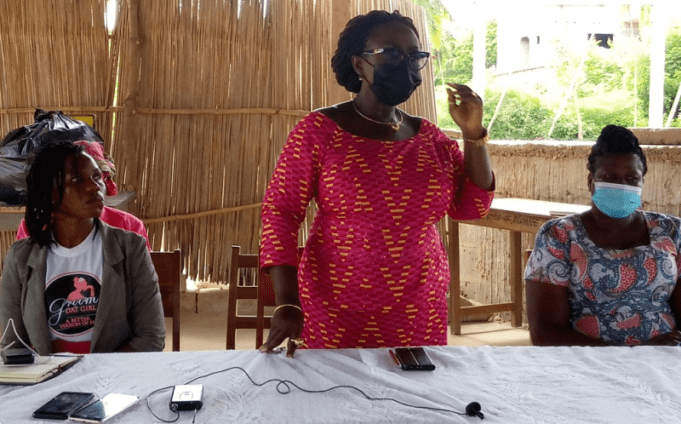 Member of Parliament (MP) for Ketu South, Abla Dzifa Gomashie has urged girls in her Constituency to be focused and not be distracted from their aspirations in life.

She said it was important for the girls to take their eyes off the obstacles and perceptions and attempt to break new grounds so they could make their parents proud, impact society and become examples to other girls.

The first female MP in Southern Volta since the Fourth Republic was addressing girl pupils of Agblekpui M/A Basic School as the Guest Speaker at an event dubbed “Breast Cancer Awareness” organised by a non-profit all-female organisation, GroomDatGirl.

Madam Gomashie, using herself as an example, said she defied all odds to get a university education, become a deputy minister and the first female MP in Volta’s south, adding it was all about determination and commitment to one’s passion.

She charged the young ones to aspire for the best and not permit anything, including boys or men, to derail them from their path to greatness.

“Every time I take a step ahead of myself, I think about you. How can I be that example for you that as a girl, whatever you’re committed to doing, you can do it? I’ll tell you to stay focused, don’t let anything distract you. Even your beauty can distract you but don’t let it.

Boys and men are praising you for your beauty. Know that they’re only going to ruin your future. You’re not the first to be told that and you won’t be the last to be told. Even me, at my age and a widow, I get that compliment. So why let that get into your head?

As girls and women, we’re specially made. Be a proud Ketu girl who recognises authority, is confident and always prayerful. Just make up your mind to put a value on yourself by becoming an important person in future to make your parents proud and help transform society.”

The engaging programme which witnessed varied talks from ladies in Volta’s media and officials from the Municipal Education Directorate including Madam Cecilia Dorkli, Ketu South Municipal Girl Child Education Officer aimed at mentoring the girls into better adults, also saw the girls being educated on breast cancer and how to examine their breasts at home to seek for early treatment as a control measure against the disease.

Team Lead of GroomDatGirl, Ms Tilda Elinam Acorlor in an interview with the Ghana News Agency, thanked the Management of the school for receiving them to enable the girls to listen to “our impactful message on empowerment to become purposeful growing adults.”

On the education on breast cancer, she said “we did it so youngsters, most especially teen girls would be responsible in identifying what’s dangerous and can stop them from attaining their dreams.”

“All they need to do is to dream as big as they can and show up for their dreams by learning and seeing their dreams come to pass,” Ms Acorlor added.

GroomDatGirl is an initiative by female broadcasters and media personnel in the Volta Region to help vulnerable girls from age 13-20 years in the region become better versions of themselves through interacting and providing career guidance to them using mediums such as parties, health walks and other social events.