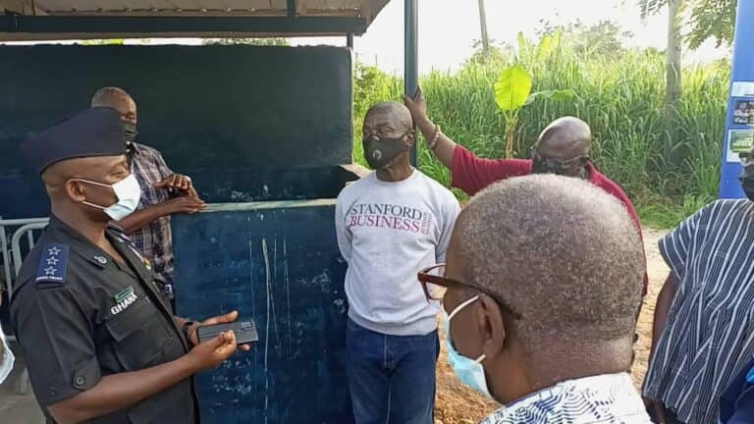 The former CEO of defunct UT Bank, Prince Kofi Amoabeng and other Concerned Senior Citizens Association of Akyem Tafo have handed over police checkpoints funded and built by the Association to Akyem Tafo District Police Command.

The facility will provide shelter to police officers deployed for spot check activities on the Akyem Kukurantumi stretch of the Koforidua to Bunso highway.

Before the facility’s construction, police personnel deployed for security operations on the highway had to endure working under the scorching sun.

Their operation comes to an abrupt end whenever it rains. The shelter will therefore solve these challenges.

The Abuakwa North Municipality has recently been faced with rampant highway robbery attacks, some of which have been fatal.

Prince Kofi Amoabeng who led the association to hand over the facility to the police said, the association embarked on the project to eradicate or reduce the crime rate on that stretch and adjourning towns and communities.

The Akyem Tafo District Police Command recently deployed Police Personnel to mount a barrier on Kukurantumi -Koforidua road at night to clamp down on increasing robbery attacks in the area.

The dreaded armed robbery gang terrorising residents in Akyem Abuakwa North, for instance, in June this year mounted a roadblock and succeeded in robbing many vehicles creating gridlock on the road.

One of the robbers shot and killed a female trader identified only as Victoria who was onboard one of the vehicles en route to Akyem Begoro to buy tomatoes.

The robbers, however, escaped into the bush before the arrival of the Police patrol team.

The Police patrol team later mobilized the youth in the Communities to help chase the robbers in the bush.

After several minutes of pursuing the robbers in the bush at site two near Bunso, the two suspects – Haruna Amadu, 25, and Joseph Nhyira, 25 were arrested.

Some of the victims identified the suspects as those who carried out the robbery operation.

Barely two weeks after, another robbery gang stormed Kyebi at dawn amidst the firing of gunshots, robbed a gold dealer in the community.

The robbers absconded with an unspecified amount of money and quantities of gold.

A similar incident occurred at Akyem Asikam a month ago where it is believed that the same group of armed robbers attacked another gold dealer.

On Monday, May 24, 2021, the notorious robbery gang mounted a roadblock on Koforidua to Kukurantumi highway to rob about 20 vehicles at about 4:30 am.

One person was shot in the process and rushed to the hospital.

The notorious armed robbers, on Wednesday, April 28, 2021, at about 8 pm, attacked Green Dor Guest House and a gas filling station nearby.

The robbers had earlier shot dead a 32-year-old bystander during a filling station robbery attack at Akyem Osiem, a nearby community.