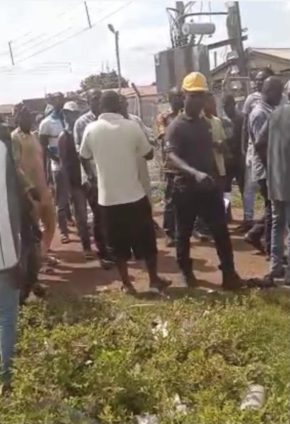 Some angry residents of Kukuo, a suburb of Tamale in the Northern Region, chased away staff of VRA/NEDCo who were accompanied by some police personnel to fix smart meters in the area.

The management of the VRA/NEDCo had brought smart meters to replace the old ones to help fight power theft but some residents in the regional capital, Tamale rejected the meters saying they prefer the old prepaid meters because the new smart meters consume more than the old ones.

This has become a very big problem for the staff in their work putting their lives in danger.

Illegal connection has become a normal practice that can easily be found in almost every house in the Tamale Metropolis.

The staff believe that because the residents can’t get access to do their illegal connections, they chased them and rejected the smart meters, to enable them to continue with the illegality.

It would be recalled that some illegal connection customers in the area were ‘brutalized’ by some police officers who accompanied VRA workers to some houses to stop the alleged criminal activities of the people.

The officers, who were involved in the action, were interdicted to help investigations.

Due to that, officers who accompanied the VRA staff to Kukuo, refused to apply force and bolted when the residents started to attack them.

NEDCo Senior Staff Association Chairman, William K.Asare, told Adom News that the police will be deploying heavy personnel to the area tomorrow for the old meters to be replaced, while VRA/NEDCo staff will be holding an emergency meeting over the attack.

DISCLAIMER: The Views, Comments, Opinions, Contributions and Statements made by Readers and Contributors on this platform do not necessarily represent the views or policy of Multimedia Group Limited.
Tags:
ECG
NEDCO
VRA