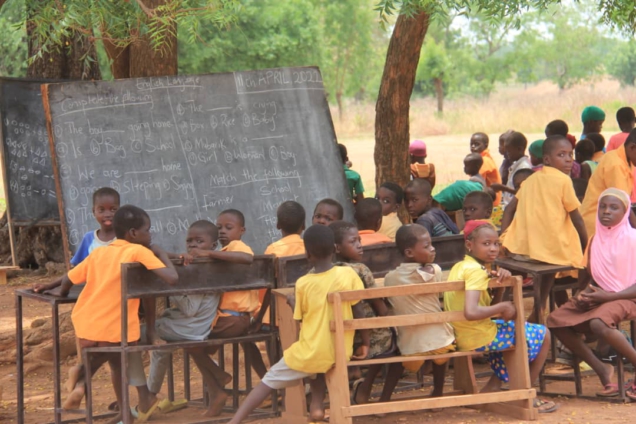 In Wantugu Tunteya Primary, the 193 students admitted have big dreams of becoming nurses, teachers, lawyers, and doctors among other professions.

But this dream is at risk daily due to the harsh weather conditions these students witness as they study under trees.

“You know those who sit in class and we those who sit under trees cannot be the same. When the sun is up, we run home whiles they sit in their classrooms to learn so when we meet to write exams they will pass better than us,” 12-year-old Napare Suleman said.

School infrastructure plays a critical role in determining the quality of learning. For this reason, parents would go the extra mile to get schools with very good infrastructure, especially in big cities for their children.

But that cannot be said about rural communities that solely depend on government to save them from the facility built with tree branches.

“We close at 1:30pm but our study time is reduced because we go home before the time because of the weather. Whenever it rains, we are forced to go home and if we return after the rain the place will be wet and drips of water from the trees wet our books which makes it difficult to study but our colleagues in other schools with structures will be learning”, Napare Suleman added.

Established in 2009 by a US Peace Corps volunteer, Anna Fred, Wantugu Tunteya Primary was to provide education for the little children who could not travel several kilometers to other communities for school.

The school was absorbed by the Ghana Education Service in 2013 with the two rooms the community had built with support from Anna Fred to roof the pupils until it was declared not fit for use three years ago, forcing teachers to conduct classes under trees.

The Assemblyman for the area, Issahaku Abdul Karim said his predecessor had written several letters to the Assembly for help but that has not yielded any results, adding that he has also written to the Assembly.

“I wrote a letter to the DCE and I was not getting a response, so I later asked the PTA and the SMC Chairman to accompany me to meet the DCE personally which we did, but the DCE directed me to rewrite another letter”, he said.

Mr. Issahaku said it was captured in the budget in the past but later dropped.

The District Chief Executive for Tolon, Fuseini Salifu Issifu Moshie assured that the school would receive the attention it deserves when the Assembly’s budget is approved.

“I made sure that the school was captured in our composite budget so when the budget is approved we will be in position to put up classrooms for them”, he said.

He added that there are times they have funding for projects which are not from the Assembly’s budget adding that when the Assembly receives any of such projects and the budget is not yet approved, they will offer the school the opportunity.

“In any case, we have other projects outside our composite budget, I have it in mind, I will direct it to Wantugu school” the DCE said.