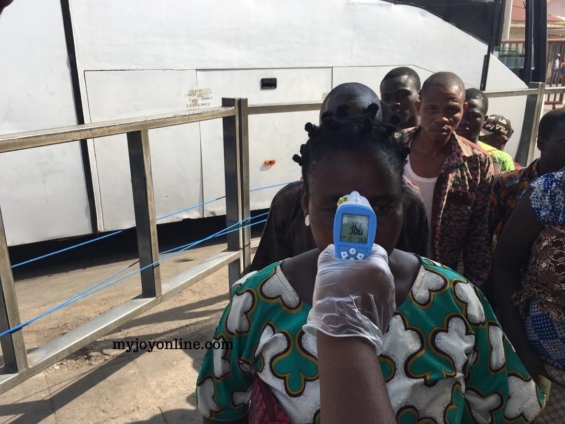 Coronavirus check at Aflao border prior to its closure

He said this is part of measures taken to curtail the importation of more Covid-19 cases while opening up sectors of the country’s economy.

In his 16th address to the nation on measures in place to curtail the virus, he paved way for the reopening of airports for international traffic, however, he noted that the land and sea borders must remain shut.

“For the avoidance of doubt, our borders, by land and sea, will continue to remain closed to human traffic until further notice,” he said.

President Akufo-Addo on Sunday paved way for the reopening of the country’s air border for international traffic, after nearly six months closure.

He said effective September 1, the Kotoka International Airport(KIA) will reopen and resume operations.

“This decision has been communicated to international airlines across the world,” the President said.

Notwithstanding, some measures have been put in place to regulate the operations of the airport as not to import more cases into the country.

He insists the already existing Covid-19 protocols must strictly be adhered to as well.

However, the land and sea borders which have also been shut since March, he said must remain shut until further notice.