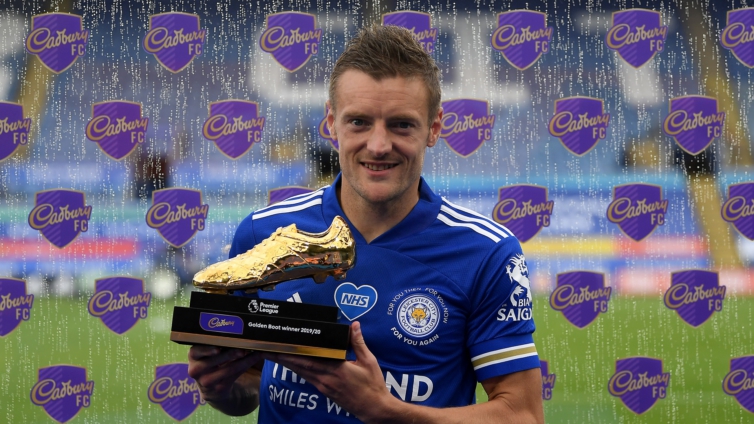 LEICESTER, ENGLAND - JULY 26: Jamie Vardy of Leicester City poses with the Golden Boot award after the Premier League match between Leicester City and Manchester United at The King Power Stadium on July 26, 2020 in Leicester, England.Football Stadiums around Europe remain empty due to the Coronavirus Pandemic as Government social distancing laws prohibit fans inside venues resulting in all fixtures being played behind closed doors. (Photo by Michael Regan/Getty Images)

The 33-year-old ended up a goal clear of Arsenal’s Pierre-Emerick Aubameyang and Southampton striker Danny Ings, both on 22.

Vardy is the ninth English player to win or share the Golden Boot.

Last season Liverpool duo Sadio Mane and Mohamed Salah and Arsenal’s Aubameyang shared it with 22 each.

Vardy still finished clear despite failing to score on the final day as Leicester lost to Manchester United to miss out on a Champions League place.

Former England striker Vardy scored more in 2015-16, Leicester’s title-winning season, with 24 goals – but missed out that time to Harry Kane’s 25.

Manchester City keeper Ederson pipped Burnley’s Nick Pope to the Golden Glove award after recording his 16th clean sheet of the season on the final day of the season in a 5-0 win against Norwich, while Pope conceded in Burnley’s 2-1 defeat against Brighton.

DISCLAIMER: The Views, Comments, Opinions, Contributions and Statements made by Readers and Contributors on this platform do not necessarily represent the views or policy of Multimedia Group Limited.
Tags:
Jamie Vardy
Leicester City
Premier League