Playback: The Probe discussed the protection of Ghana's burgeoning democracy in the wake of violent extremism - MyJoyOnline.com

Playback: The Probe discussed the protection of Ghana’s burgeoning democracy in the wake of violent extremism 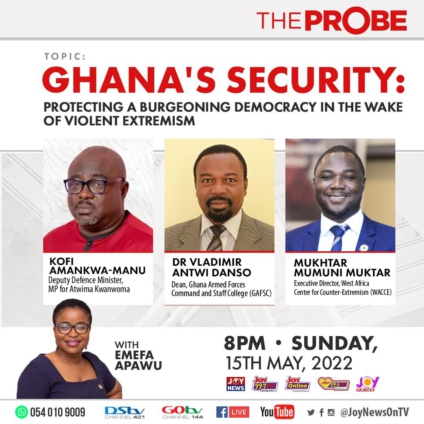 In recent times, there have been widespread conversations, about the state of security in Ghana.

For example, the West Africa Center for Counter-Extremism (WACCE), says Ghana’s political stability may be disrupted, in the wake of terrorism in the Sahel and other domestic challenges such as youth unemployment.

In a report by the regional security research organisation, it said even though Ghana has been relatively peaceful over the years, there is the likelihood of an upsurge, due to recent happenings in the sub-region, and neighbouring countries such as Benin, Togo and Ivory Coast.

WACCE maintained that the threats of political instability can, however, be forestalled if measures are put in place to prevent the impending dangers.

In the midst of these concerns, today’s edition of The Probe will delve into the issue of Ghana’s security with a team of crack experts and thought leaders on the subject matter.