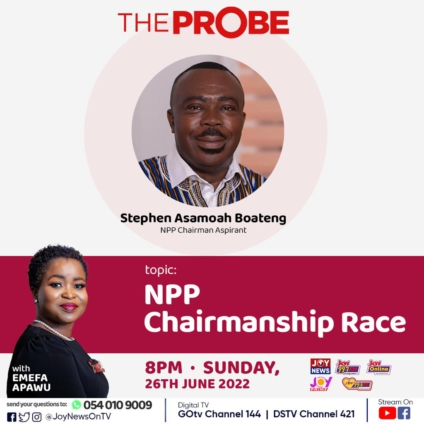 Tonight, Aspiring National Chairman for the New Patriotic Party, Stephen Asamoah Boateng popularly known as ‘Asabeee’ will speak with Host of The Probe, Emefa Apawu on his ambitions for the party should he win the national executive election.

Asabeee was the former Director-General of the State Interest and Governance Authority (SIGA) and a staunch member of the New Patriotic Party.

He also contested for the NPP flagbearership race in 2014 to represent the party in the 2016 elections but lost to President Akufo-Addo.

The Former Member of Parliament for the Mfantseman West Constituency regards his loss to President Akufo-Addo as a “lesson” in his political life.