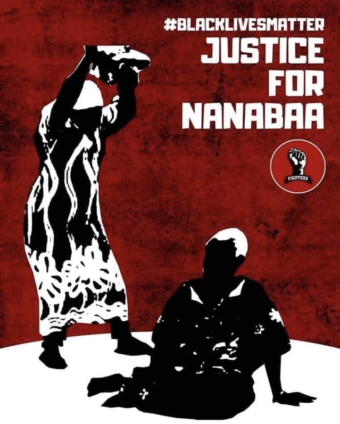 Following the lynching of Akua Denteh, a 90-year-old woman in the Gonja East District of the Northern Region, there has been uproar and a call for justice for her gruesome murder.

Akua Denteh was accused of witchcraft by a fetish priest subsequently leading to her lynching by relatives and community members.

On social media, enraged Ghanaians have taken to the hashtag #JusticeForNanabaa to protest her lynching and are calling for swift actions from the government to ensure that the evil doers face the full wrath of the law.

A petition is also being signed on social media to put more pressure on government to see to it that justice is carried out.

You lynch a 90 year old woman because a so called Fetish Priest said she’s a witch..We’re in the 21st Century and these absurd behaviors must stop#JusticeForNanabaa pic.twitter.com/zKtaT0IXbE

Hustle and stop blaming old ladies for your misfortunes #JusticeForNanabaa

By now it is this men of God oo who caused this. Killing someone just because she’s a suspect of witchcraft. ei #JusticeForNanabaa pic.twitter.com/BHjBWsr9Mm

Today, women in a community have lynched a 90 year old woman cos they think she’s a witch smh…sad #JusticeForNanabaa

Are we still killing people in this modern world just because you suspect them of witchcraft? Are we serious? WTF #JusticeForNanabaa

What dey pain me kraaa be say the woman be 90 years old and you could watch her face and do that to her , Herh nnipa y3 wicked

In older days old people were respected a lot , and they were regarded as the people with wisdom and good advice , now we see them as witches and wizard .#JusticeForNanabaa

The way Dem dey kill witches Nowadays, make no bro cross my Lane oo😫😫😫 I will just take you do soup simple🍲#JusticeForNanabaa

A Woman With 7 Children, Like How Will The Children Feel When They See The Video. And 48 hours No Actions Has Been Taken By The Police.
……
Action Must Be Taken Now By The @GhPoliceService 😡😡#JusticeForNanabaa

Great advice from @Bridget_Otoo to the youth who blame the life challenges on “witch grandmother” ; and to those who quention why grannies grow older, a message for you. #JusticeForNanabaa pic.twitter.com/pF5RBn15WD

Beating a 90yr old woman just because she’s ah witch,you’ll go deep down too these woman are lazy and don’t want to do any hard work but will be blaming witches/ Wizards for thier problems😡😡😡 #JusticeForNanabaa

I just watched the full video of NanaBaa’s lynching and chale I’m really heart broken 😢💔. See how a woman was courageously hitting an old woman with a stone😭. All those involved need to be taken into police custody and dealt with severely ☹☹#JusticeForNanabaa ✊🏽✊🏽✊🏽