Mampong residents fume over attempts to introduce mining in community 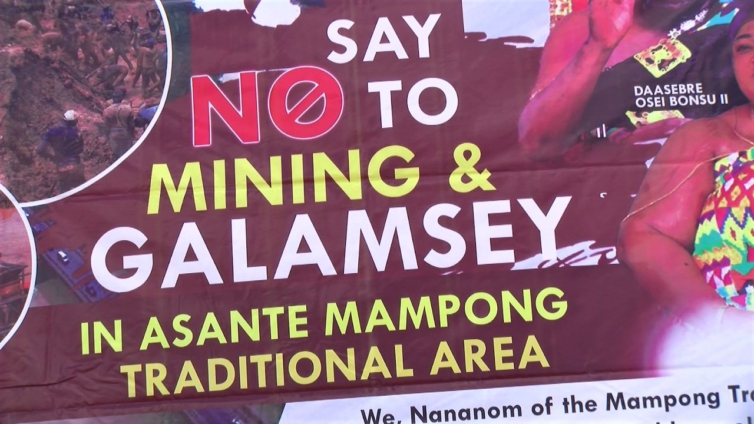 Indigenes of Asante Mampong have cautioned the Minerals Commission against granting prospecting licenses to mining companies without recourse to the interest of affected communities.

This follows the persistent issuance of prospecting licensing to gold mining companies to concessions in the Mampong traditional area.

The Concerned Citizens of Mampong against Galamsey, in consolidated efforts with the local traditional council, have vented their displeasure against the Minerals Commission to rope the community into what they describe as a “galamsey arena”.

Clad in black with red arm and head bands, the activists drawn from in and out of Asante Mampong emphasized on the ravaging impacts of mining in most operational areas.

Perturbed by the imminent threats to the five water sources in the area, the group questioned the mandate of the Mineral Commission in safeguarding mining communities.

Lead Convenor, Victor Owusu, says the behavior of the institution reveals it is irresponsible and care less about the lives of people.

“The Minerals Commission is supposedly required to create a congenial atmosphere in which all stakeholders work as partners in as safe environment to achieve sustainable development through mining. But the big question to ask is, did the minerals commission in granting the mineral rights to prospective companies to mine in the Asante Mampong traditional area engage the people as stakeholders in any form? Did the commission do any due diligence as to the effect of surface mining operations on rivers and water bodies in Asante Mampong?. The careless abandon with which the Minerals Commission grant mineral rights to prospectors without recourse to the interest of the communities in our view smacks of an irresponsible organisation battering the lives of people without shame or a feeling of guilt,” he said.

According to the group, the Minerals Commission in November, 2022 issued a license to Active Target Minerals Resource, a gold mining company, to prospect lands and forest reserves in the area.

This follows an initial opposition by the Mamponghene, Daasebere Osei Bonsu II to a similar offer to Eriants Company in 2019.

The license withdrawal of the latter came with the destoolment of Benimhene.

Gyaasehene, Nana Boakye Yiadom explains the traditional council was alarmed when it took notice of the local government’s unrelenting position to introduce mining in the town.

“We thought everything had returned to normal. Later, we saw notice at the Municipal assembly that they will be introducing mining at Benim. Minerals Commission have turned a blind eye to the negative consequences of mining,” he said.

Asante Mampong, as the Silver Stool in the Asante Kingdom, serves as a major trading center to both native and foreign traders in the northern part of the region.

Despite the dwindling economic situation in the area, traders here are in consent with the communal decision.

But there are some who will welcome responsible mining.

Abena Pokuaa, a secondhand clothes vendor, was worried the introduction of mining poses threat to their source of drinking water.

“Communities are always involved illegal mining, but they are still suffering. We need water daily. It expensive cost now is due to the destruction caused to our water sources in illegal mining sites. We agree with them if they are fighting it,” she said.

Nana Kwame, a mini cargo operator, however believes a responsible mining could reduce unemployment in the area.

Traditional leaders and residents of Asante Mampong are resolved in rejecting the harrowing impacts of mining on both economic and educational activities.

DISCLAIMER: The Views, Comments, Opinions, Contributions and Statements made by Readers and Contributors on this platform do not necessarily represent the views or policy of Multimedia Group Limited.
Tags:
Community Mining
Minerals Commission