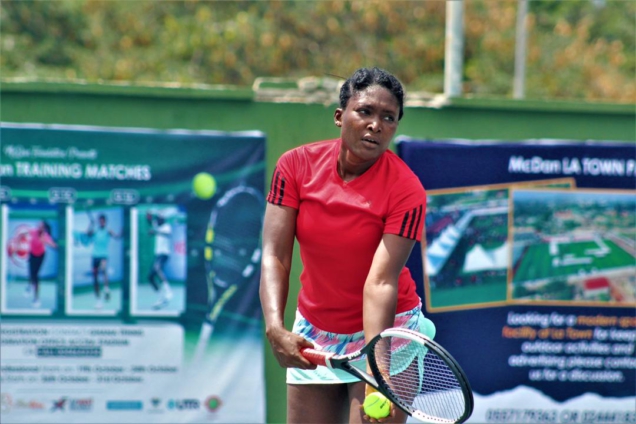 Day two of the McDan Tennis Training Matches saw ladies in the professional category battle it out in the round of 16 stage.

The biggest game of the day was between top seed, Yvonne Bruce-Tagoe and Helena Hammond with Yvonne winning 6-2, 6-2.

The match between Tracy Ampah and Annette Crushack had to end prematurely due to a health condition sustained by the former.

“During the second set, I saw Annette holding her stomach so I called for the medical team who had to decide if she is fit to play or not.

During Asamoah Gyan’s tournament at 37, something similar happened and I think she failed to treat herself to full recovery and I think that was what happened today and according to ITF regulations, trainers have three minutes to treat injuries so if, after three minutes the player is still unable to play, the match is over.”

Here are the rest of the results from day two:

The games are set to resume Wednesday morning, with the match-up between Jepheth Bagerbaseh and Henry Asokwa one of the games to look out for.

DISCLAIMER: The Views, Comments, Opinions, Contributions and Statements made by Readers and Contributors on this platform do not necessarily represent the views or policy of Multimedia Group Limited.
Tags:
McDan Tennis Training matches
Tennis