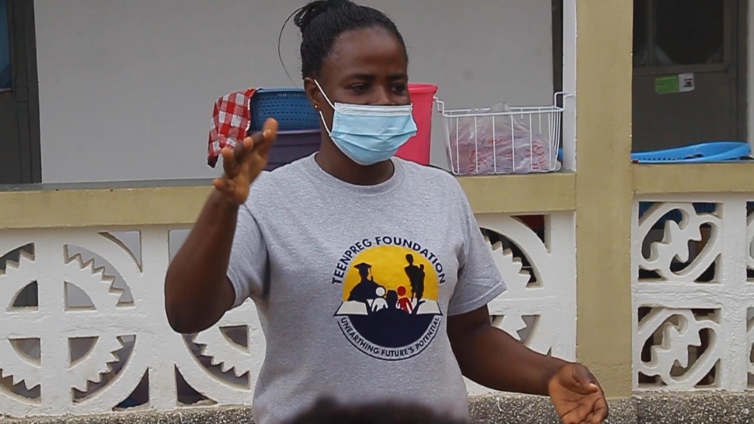 Teenage Pregnancy remains a big challenge in Ghana and data from the annual Ghana Health Service (GHS) statistics on this, is very alarming. This time, it is not only girls that are between 13-19 but girls between 10 to 13 years as well.

The data show that in 2020, nearly 301 girls were impregnated every day in Ghana while 13 teenage pregnancies were recorded every one hour.

According to the Service, Ghana recorded 109,888 teen pregnancies with the lowest of the girls to be put in the family way being 10-year-olds.

But there’s a very healthy development as a victim of rape and teenage pregnancy who’s been able to pull through the situation has established a foundation that takes care of 400 teenage girls in the Abura Asebu Kwamankese District.

Ernestina Akosua Acquah has relied on farming to feed and sponsor these girls in schools and has also put them into apprenticeships.

Ernestina was raped when she was in SHS 2 and got pregnant as a result. After giving birth, she vowed not to allow the circumstances of childbirth to be a barrier but brushed her painful experience aside to help girls that are vulnerable in her District.

Currently, she has put some of the girls back into the Senior High Schools and Junior High Schools and supporting majority of the 400 girls in apprenticeship. She has arranged for the girls to be taught skills, skills that would empower them and take them out of poverty, one of the main causes of the menace.

Ernestina says, the girls are vulnerable and if they are allowed to remain in their current situation, men would still prey on them and get them pregnant again.

Jennifer, a teenage mother of two children in the Abura Asebu Kwamankese District, tells a chilling tale of what put her in the situation she finds herself.

“It’s not that we are bad girls but getting what we would eat on a daily basis is what has landed us here. So, anyone that gives us something takes advantage of how vulnerable we are and sleeps with us,” she stated.

Jennifer’s colleague teenage mother, Charlotte shares: “I wasn’t doing well at school and so I dropped out and decided to learn some apprenticeship but hunger was killing me. And then I got a guy who told me he would help me.”

According to her, a guy who promised to take care of her got her pregnant in the process. She narrated further that she decided to terminate the pregnancy and tried several times but failed.

She stated: “I had no option but to give birth and Teenpreg Foundation came to my aid and supported me to learn a skill to empower me. I thus, couldn’t kill the child but I need help. I am not finding things easy. What to eat sometimes becomes a challenge, even as we learn the skill, we need some support,” she added.

The tales are many and varied but one thing that shocks Ernestina Akosua Acquah was her encounter with a 13-year-old girl who’s had two children already.

Her prayer is to support the girls in order for them not to go back to the situation that made them pregnant. She is calling for support for the girls to get them empowered through the acquisition of skills.

Parental irresponsibility, broken homes may be some of the causes of the menace of teenage pregnancy but poverty that makes the girls struggle to find what they would eat on a daily basis features prominently in all the narrations of the victims. It’s simply a battle for survival each passing day.

Ernestina’s Teenpreg Foundation is a non-profit organization that was formed purposely to support teenage mothers to go back to school and to give them a reason to rewrite their stories.

DISCLAIMER: The Views, Comments, Opinions, Contributions and Statements made by Readers and Contributors on this platform do not necessarily represent the views or policy of Multimedia Group Limited.
Tags:
Ernestina Akosua Acquah
Teenage Pregnancy
TeenPreg Foundation