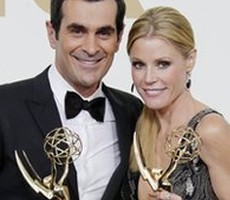 Stars of US sitcom Modern Family have agreed new pay deals after six of the cast sued TV network ABC last week over their contracts.

Show producer Fox confirmed the deal and said filming for the fourth series would begin on Monday.

Exact financial terms of the new deal were not disclosed.

Show creator Steve Levitan told reporters on Friday he was “very happy” the dispute was resolved.

“It’s a distraction I’m happy to see end,” he added.

Five of the actors sued the network on Tuesday, asking a judge to rule their contracts should be invalidated because they violated California law prohibiting deals that run longer than seven years. O’Neill joined the case later in the week.

As the dispute dragged on, a first “table read” rehearsal for the season was cancelled.

The new deal will also see the cast receive a small percentage of the show’s profits.

In exchange for the pay rise, the cast have agreed to add one year to their existing seven-season contracts – which will see their salaries boosted to $350,000 (£222,000) per episode for an eighth series – and will drop their legal action.

The sitcom about the everyday lives of a family of fathers, sons, daughters and grandchildren living in suburbia is among ABC’s top shows.

It won the Emmy – US television’s highest honour – for best comedy last year, while Burrell, Bowen and Stonestreet have won individual Emmys for their work on the show.

The sitcom was also recently nominated for 14 Emmys for this year’s awards.