MPs hold Speaker to ransom over CI on creation of constituencies - MyJoyOnline.com

MPs hold Speaker to ransom over CI on creation of constituencies 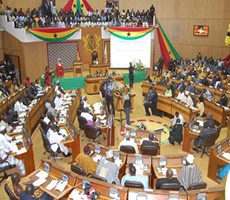 The Finance Minister Dr Kwabena Duffuor who is in Parliament to present a supplementary budget is stuck to his seat as particularly Minority MPs vehemently protest the laying of a paper on Constitutional Instrument (CI) 73 on the creation of 45 new constituencies.

The Minority insist that the laying of the paper was improperly done.

Joy News’ Sammy Darko, who is in Parliament said the Speaker, Joyce Bamford Addo has stood her grounds that she did nothing wrong by allowing the paper to be laid yesterday.

In response to persistent heckling and murmuring on the floor of the House, Justice Bamford Addo asked any MP who thought she acted wrongly to show their faces by standing up and every single member of the Minority including their Leader Osei Kyei-Mensah-Bonsu came to their feet.

The contention of the Minority is that in total disregard for Order 93 of their Standing Orders which bars Parliament from discussing matters pending before the courts, the Speaker had allowed the CI 73 in respect of the new constituencies to be laid when in fact there was a case pending in court.

Dr Opoku had argued that in accordance with Order 93(1) of the Standing Orders, Parliament ought not discuss any matter pending in court so as to prejudice the outcome of the case.

But his arguments were rejected by the Speaker.

He told Joy FM Super Morning Show Wednesday that an illegality was being perpetrated in Parliament.

He argued the CI which was laid before the House had not even been numbered and wondered why that was accepted.

He insisted there was nothing wrong with process adopted.

Probably unwillingly to let the matter rest, the Minority continued their opposition to the laying of the paper Wednesday.

Sammy Darko reported there are loud shouts on the floor of the House on this matter.