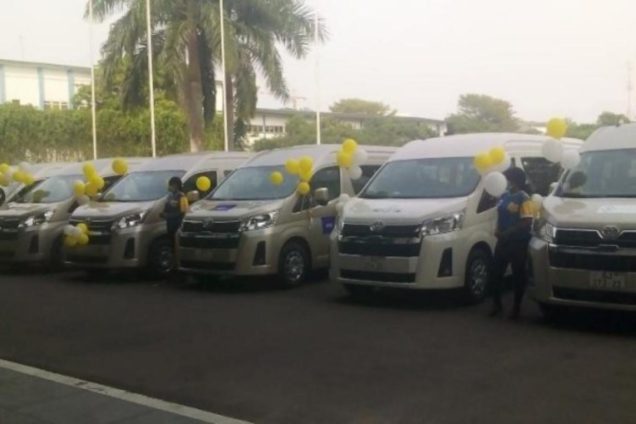 Mobile telecommunications giant, MTN Ghana, has presented eight vehicles to its distributors across the country.

This is part of the company’s efforts at rewarding customers for their loyalty and dedicated services to the MTN brand.

They were each given a Toyota Hiace minibus to facilitate their work.

Speaking in an interview with the media on the sidelines of a handing over ceremony in Accra, Shaibu Haruna, the Sales and Distribution Officer at MTN, said the gesture was to strengthen the partnership with distributors.

He said as a telecommunication company, the partnership was critical because it was the only way to reach customers in the remotest areas in the country and serve them better.

“Looking ahead, we believe that we have a partnership that will take us to become the biggest and valuable platform in Ghana and across Africa,” he added.

Mr Haruna assured distributors of continuous partnership to drive the revitalisation agenda of the Company.

“If you noticed, by the side of the branding, we have highlighted some of the digital applications that we will drive with our partners, which is ‘Ayoba’ and ‘My MTN’ which are two of the very valuable platforms that we want to build for the future,” he said.

MTN launched its 25th anniversary mega consumer promotion in August this year to reward customers for their loyalty to the brand.

Mr. Nathan Lee-Winans Annobi, CEO NanaTel Ltd, one of the distributors, who spoke on behalf of the rest of the beneficiaries, commended MTN for the support and said it would strengthen their partnership.

Madam Cynthia Fosu, Chief Executive Officer of Izone, said though most of the Company’s distributions were done digitally, the presentation of the minibuses would enable them to carry out activities such as activations and awareness creation campaigns.