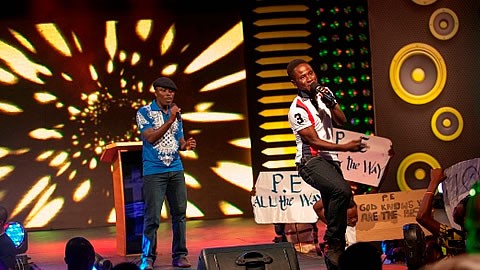 The penultimate evictions of the music reality show MTN Hitmaker, came-off in fantastic style last weekend with just a single vote separating two of the bottom three contestants from eviction.

Abusuapanyin Chikicherkerr survived eviction with a single vote ahead of closest rival Cecil Smooth when he polled 1566 votes against Cecil’s 1565. PE pooled approximately 1200.

Judges, Bessa Simons and Zapp Mallet were of the view that as the competition has been so keenly contested, viewers should expect more entertainment and creativity from the grand finale.

Bessa said: “I think we have the best four in the finals but I expect that we are going to see a lot of nervousness because it is the final stage…Normally you wouldn’t see a fantastic show at the end because everyone is over anxious but with these guys, the way they have been performing so far, the grand finale is going to be really great!”

The show’s music director added, “It will be an experience to witness their performances with a live band in the second season. Contestants have learnt a lot so they now have to build on it. People know their faces and they have in their portfolio about five to six songs. Go out there and finish four more songs, treat it as project and see what comes out of it. Sometimes those who win do not achieve much but once you have this exposure, you have to capitalize on it.”

Zapp Mallet, one of the judges said viewers should expect nothing but fireworks and explosion on the final day. “These guys have done their best, you know they are relatively new and are now growing up in the music industry. The stakes are high and they are definitely going to put in everything they have to win the competition.”