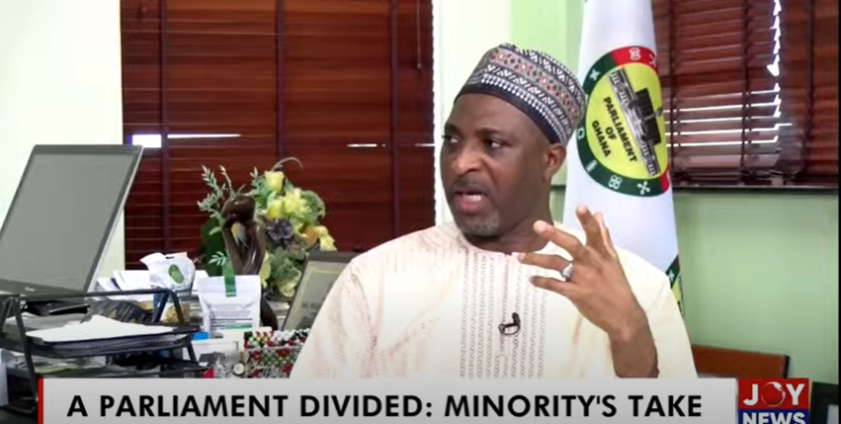 Member of Parliament for North Tongu, Samuel Okudzeto Ablakwa says the position taken by the Minority Chief Whip in the case of the three MPs being referred to the Privileges Committee is his alone and not the Minority’s position.

According to him, the Minority is yet to meet to discuss the issue and take a common stance on the matter.

Speaking on JoyNews PM Express, Okudzeto Ablakwa said, “Let me state that first of all, the position taken by the Honourable Muntaka Mubarak is largely a personal position. We haven’t caucused on this.

“I haven’t been invited to any caucus meeting where we have discussed it and taken a common position so at this point it is an action which is solely in the name of Muntaka Mubarak. So if you studied that motion carefully, you’d notice that he signs on his behalf and he leaves it there, he does not drag in the entire caucus.”

The Minority Chief Whip, Muntaka Mubarak has filed a motion challenging the Speaker’s authority to refer three MPs of the House to the Privileges Committee suo moto.

Speaking in an exclusive interview on JoyNews’ PM Express Tuesday, he stated that Speaker does not have the authority to refer MPs to the Privileges Committee without an application first coming from a Member of the House or any other person the Standing Orders deem fit.

“So you see if you’re not a member,” he explained, “you’ll not be conversant with these standing orders to apply the rules, and unfortunately Speaker is not a Member of Parliament.”

According to him, the act, if it should be permitted could become a dangerous precedent for other Speakers to follow in the future.

He noted that it could pave way for future Speakers to abuse their authority by referring MPs to the Privileges Committee at their own whims and caprices without following due process.

“This is the challenge, today it may be Bagbin, could you imagine that the Speaker we have is a Speaker on the Majority side with this numbers, and we allow what Speaker Bagbin is attempting to do to stay, believe me, and whichever group are in the Minority will really really have a run for their money.

“Because he’ll just get up and get civil society write petition then he’ll refer you to privileges, this one writes to Speaker then he refers you to Privileges… that is why I want to believe that the framers of our standing orders are mindful of this that’s why they said it should be a member.”