My career focus not on Navarette – Dogboe - MyJoyOnline.com

My career focus not on Navarette – Dogboe 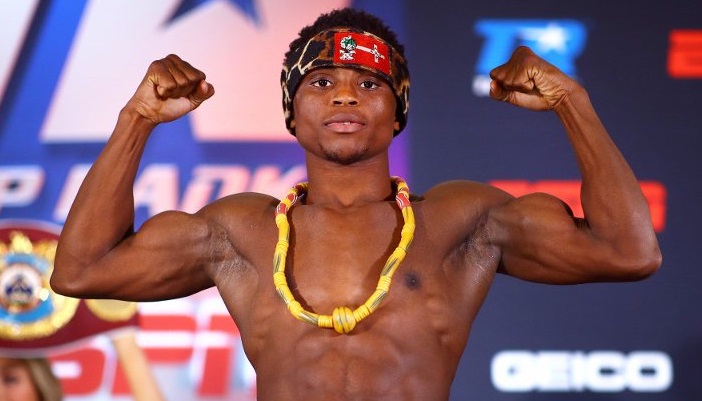 Former world champion Isaac ‘Royal Storm’ Dogboe says he wants to shrug off the conversations about his former opponent Emmanuel Navarette and work on his journey back to the top.

The ex WBO super bantamweight champion, who is in his native Ghana for holidays, had an initially scheduled December 5 bout with Michael Conlan cancelled because the British opponent suffered a training injury.

Dogboe suffered the only two losses of his career to Navarette who is now performing marvellously well as a champion.

Dogboe (21-2, 15kos) has been spending time with his family and church (Apostle Revelation Society – ARS) in the coastal town of Keta in the Volta Region of Ghana. He has also been spending a lot of time with his churches leader Prophet Wogblexo Wovenu.

“I can’t think of Navarette right now. I want to get back plant my feet, measure my steps and focusing on me. I don’t want to focus on what Navarette is doing. I am working my way back up and I am doing it with experience.”

“I have been at the highest height. I have seen it all and I have dropped. Right now I have put my faith in God and just keep on walking.”

“I want to focus on my journey and get back to the top and that’s it. Navarette is good and he defeated me. He is doing well and so that’s his story. I want to tell my own story.” he told Joy Sports in his hometown of Keta in Ghana.

Dogboe, who is now 26, has taken his faith in Christianity even more seriously now and wants to focus more on the gym, sparring, running, strength and conditioning.

To the suggestions that he took a risk too big in accepting the Michael Conlan fight, Dogboe said.“I say that no risk, no reward. Nobody thought I’d beat Magdaleno, Magdaleno is too fast and experienced, strong and a southpaw, they said. But I believed in God I and worked hard and God prevailed.”

I don’t regret the two losses to Navarette. I believe those losses opened new doors in my life and my mind as well. I believe every ounce of it. Just believe in God be truthful to yourself and keep working.”

Dogboe who is a 2012 Olympian has done a lot of self-introspection says he realizes his strengths and my weaknesses.

“I know and I understand that I may not what to start something because a little laziness may set in. But once I start and I’m going and I’m gone.

Sometimes my coaches tell me, Isaac, you need to slow down a bit. But I keep going.”

Dogboe recorded a knockout win against Chris Alvalos some months ago in his comeback fight to re announce himself in the featherweight division.

“Now I want to let my opponent worry about what I’m going to do. I want the fans to be screaming m name and I want them to be excited. I want them to have the feeling that they watched a great fight and be excited about it and that’s what TV likes too,” Dogboe told Joy sports Nathaniel Attoh in an exclusive chat.

Earlier this year, Isaac Dogboe switched trainers from his father Paul (an ex British Army Officer) to Barry Hunter who led him to victory in his comeback against Chris Avalos.

Isaac sees Barry Hunter as the right kind to take over from his father.

“I couldn’t have asked for any better person. I have tried many others. I worked with Freddie Roach but Barry is just a different guy. Just to keep a long story short I am happy where I am. Freddie is a great guy, I knew him before we made the contact for the possibility of him training me. It just didn’t work out.”

“I am with Barry Hunter now and he has been very supportive. I enjoy training so much now at age 26. Each and every day I am looking forward to going to training. Sometimes it gets heated but we also use the moments to let off stress and it just goes well.”

“When I first went to these guys I told them to get explicitly plain with me. “If it’s bad it’s bad. If it’s good it’s good. This is where the boxer trainer relationship comes to play,” he said.

Dogboe is expected to return to action in February next year against a yet to be named opponent to be confirmed by his promoters Top Rank.