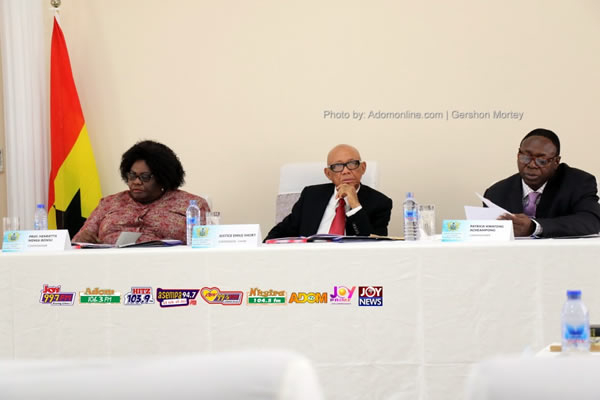 The Civic Forum Initiative has called on the opposition National Democratic Congress (NDC) to rescind its decision not to participate in the Emile Short Commission.

The statement issued on Tuesday and signed by Prof. Kwasi Jonah, Prof H. Kwasi Prempeh and Chairperson of Coalition of Domestic Election Observers said, “We have no reason to doubt the integrity and neutrality of the members of the Commission of Enquiry.”

The Forum also pleaded with Ghanaians to give the Commission the needed support to the canker of vigilantism.

Below is the statement from the Forum:

Representatives of civil society organisations, namely Civic Forum Initiative (CFI), the Institute for Democratic Governance (IDEG) the Coalition of Domestic Election Observers (CODEO) and the Centre for Democratic Development (CDD), convened an emergency meeting on Thursday February 14 2019 at the IDEG auditorium to review the security situation following the violence that occurred at La Bawaleshie during the Ayawaso-West Wuogon Constituency by-election of January 31 2019.

After an exhaustive evaluation of the political and security environment prevailing in the country in the wake of the Ayawaso-West Wuogon Constituency by-election violence noted the following:

a. The total condemnation by political parties, civil society organisations and the international community of the violence perpetrated by state security personnel during the by-election.

b. The growing threat of thuggery and hooliganism of illegally armed groups euphemistically referred to as political vigilante groups within the ranks of the two major political parties in Ghana.

c. The establishment by the government on February 6, 2019, of a four-member Commission of Enquiry to conduct investigations into the circumstances surrounding the violence that erupted in the Ayawaso West Wuogon Constituency by-election.

d. The concerns expressed by the National Democratic Congress (NDC) and its minority group in Parliament about the composition and implications of the Commission of Enquiry appointed to investigate the Constituency by-election violence.

In consideration of the above we wish to state that:

a.  We recognize the democratic right of the NDC to raise concerns about the government’s decision to establish the Commission of Enquiry.

b. We have no reason to doubt the integrity and neutrality of the members of the Commission of Enquiry.

c. There is merit in the call and expectation that work of the Commission will not preclude the criminal investigation and prosecution of persons found culpable.

d. The Ayawaso-West Wuogon Constituency by-election violence is not an isolated incident but a wider trend of increasing drift of the nation into electoral violence, solution to which is a collective national responsibility. Illegally armed groups represent an existential threat to the peace, stability and prosperity of Ghana.

e. The Commission of Enquiry presents a rare, welcomed and the last window of opportunity ahead of the 2020 Elections to deal decisively with the threat of illegally armed groups.

Accordingly, we wish to appeal to:

a. The President to extend the time frame for the work of the Commission of Enquiry to enable it to do a more thorough job.

b. The Council of State, National Peace Council, National House of Chiefs, Religious leaders and all well-meaning Ghanaians to prevail on the two major political parties to immediately dissolve and discontinue the formation and operation of illegal armed groups commonly referred to as Political Vigilante groups.

c. The government and security agencies should take concrete steps to ensure that the kind of violence that occurred in the Ayawaso-West Wuogon Constituency by-election does not spill over to future elections, and indeed, into the 2020 Election.

d. The NDC, in the national interest, to seriously reconsider its position of non-cooperation with the Commission.

e. The Commission of Enquiry to continue to operate in a transparent and open manner to allay the fears of all who have expressed concerns about its establishment.

f. Our fellow Ghanaians to take a keen interest and offer their full support to the work of the Commission of Enquiry as well as do all they can to protect the peace and democratic stability the nation has enjoyed in the Fourth Republic as we look forward to the 2020 general elections.

To demonstrate our commitment to supporting good faith efforts to deal with the threat of illegally armed groups, we would be engaging principal national stakeholders to discuss ways to work together to deal with issues.

In addition, we will hold ourselves in readiness to offer any help that the Commission may require for it to succeed. We call on all Ghanaians to support these initiatives towards peace and stability.

DISCLAIMER: The Views, Comments, Opinions, Contributions and Statements made by Readers and Contributors on this platform do not necessarily represent the views or policy of Multimedia Group Limited.
Tags:
Emile Short Commission
NDC