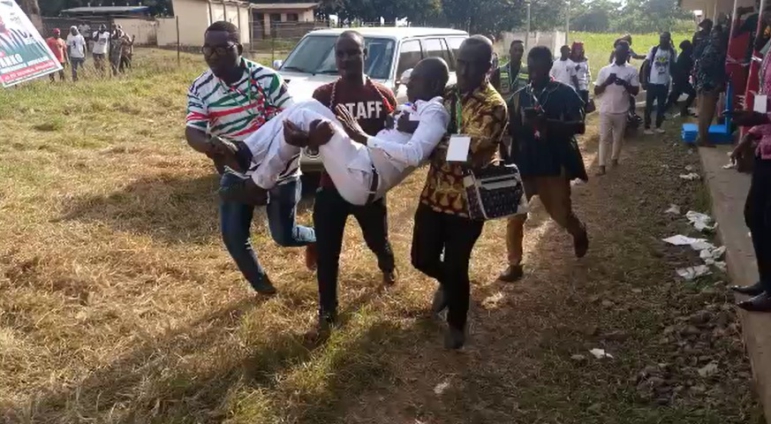 One of the aspirants seeking for Oti Regional Secretary position, Gado Yakubu Ninsaw, collapsed on Sunday after losing the election.

Dressed in all white in expectation of a resounding victory, Mr Ninsaw had the shock of his life when the results did not go in his favour.

He collapsed after realizing the opponent was in a comfortable lead during the counting and ahead of the official declaration.

Party officials and onlookers rushed to revive him and he was later sent to the hospital for medical treatment.

In the comments, the Member of Parliament for Krachi West, Helen Adjoa Ntoso, advised politicians not to take the game at heart.

She added that the way the defeated politician tumbled down as he stood was a clear indication he was suffering from exhaustion or a health condition or even both.

“He could have died. Thanks be to God that he is still alive. We all need to be health conscious. This is what happens when you mainly depend on politics for the upkeep of you and your family,” she said.

The incumbent chairman, who won with 162 votes, assured of working hard to retain all the parliamentary seats in Oti and also double the presidential votes for John Mahama for victory 2024.

The winner of the Women’s Organiser position, Paulina Magyam, also promised to work hard with the elected executives to capture power from NPP in 2024

DISCLAIMER: The Views, Comments, Opinions, Contributions and Statements made by Readers and Contributors on this platform do not necessarily represent the views or policy of Multimedia Group Limited.
Tags:
Collapse
Gado Yakubu Ninsaw
NDC election