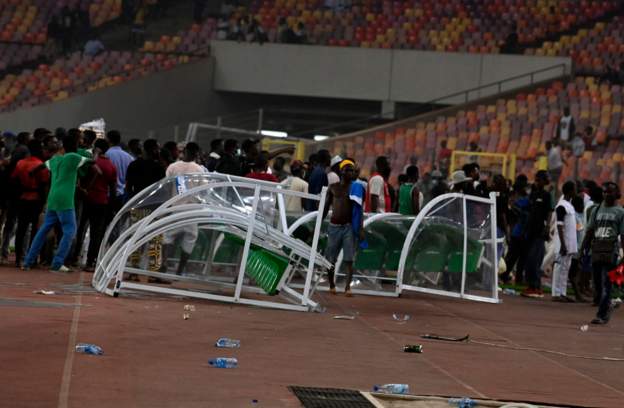 Super Eagles fans stormed the pitch after the game

The general secretary of the Nigeria Football Federation (NFF) has called out fans for attacking players and storming the pitch in the capital, Abuja after the Super Eagles failed to qualify for the World Cup on Tuesday evening.

Mohammed Sanusi told the BBC he understood the passion of the Nigerian fans, but said the violence, which Super Eagles supporters reportedly directed towards their own players and officials, was unwise and uncalled for.

Nigeria drew with Ghana 1-1, meaning their arch-rivals have qualified to go to Qatar on the away goals rule.

Mr Sanusi also said he regretted the “shocking” death of a Zambian doctor, who was working as part of the medical staff on the night.

He said that Dr Joseph Kabungo was not on the pitch when violence erupted – and had been in his office where medics were called to help him after he “started gasping for breath”.

There have been conflicting reports about how Dr Kabungo died, some saying he suffered a heart attack. The Zambian football community has been mourning the medic’s death.

Mr Sanusi also apologised for Nigeria’s failure to qualify: “It was very unfortunate and we are sad – we are not happy with what has happened.”

The full extent of the damage caused by the Super Eagles fans on Tuesday night is still unclear, but stands in the technical areas and side-line banners were destroyed.

Police are reported to have fired teargas and used batons to disperse the crowd.

Sports commentators say the post-match incident is likely attract the attention of the Confederation of African Football (Caf) and the world football governing body Fifa.